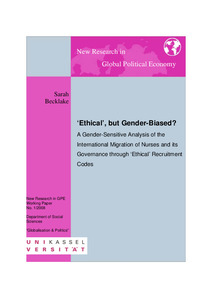 The migration of healthcare professionals from developing to developed countries, often aided by recruitment agencies, is a phenomenon of great international concern, as reflected in the construction of numerous ethical recruitment codes, which aim to govern the process. In an attempt to provide an overview of the situation, dealing specifically with the migration of nurses, as well as a critical and gender sensitive analysis of the codes, this paper follows three broad steps: first, it reviews the literature dedicated to the migration of nurses from developing to developed countries, adding a gendered account to more conventional push-pull explanations; second, it delineates the positive and negative effects that nurse migration has at the stakeholders levels of the individual, institutional, national and international level, paying particular attention to the role of gender; and third, it reviews and compares numerous codes for the ethical recruitment of nurses, highlighting the gendered rationale and consequences they may have. In showing that nurse migration is a gendered phenomenon, the paper questions whether the codes, written in gender neutral language, will come to bear unintended consequences that will effectively work to uphold gender stereotypes and inequalities.