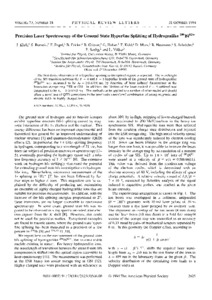 The first direct observation of a hyperfine splitting in the optical regime is reported. The wavelength of the M1 transition between the F = 4 and F = 5 hyperfine levels of the ground state of hydrogenlike ^209 Bi^82+ was measured to be \lamda_0 = 243.87(4) nm by detection of laser induced fluorescence at the heavy-ion storage ring ESR at GSI. In addition, the lifetime of the laser excited F = 5 sublevel was determined to be \tau_0 = 0.351(16) ms. The method can be applied to a number of other nuclei and should allow a novel test of QED corrections in the previously unexplored combination of strong magnetic and electric fields in highly charged ions.