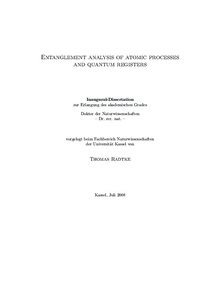 During recent years, quantum information processing and the study of N−qubit quantum systems have attracted a lot of interest, both in theory and experiment. Apart from the promise of performing efficient quantum information protocols, such as quantum key distribution, teleportation or quantum computation, however, these investigations also revealed a great deal of difficulties which still need to be resolved in practise.
Quantum information protocols rely on the application of unitary and non–unitary quantum operations that act on a given set of quantum mechanical two-state systems (qubits) to form (entangled) states, in which the information is encoded. The overall system of qubits is often referred to as a quantum register.
Today the entanglement in a quantum register is known as the key resource for many protocols of quantum computation and quantum information theory. However, despite the successful demonstration of several protocols, such as teleportation or quantum key distribution, there are still many open questions of how entanglement affects the efficiency of quantum algorithms or how it can be protected against noisy environments.
To facilitate the simulation of such N−qubit quantum systems and the analysis of their entanglement properties, we have developed the Feynman program. The program package provides all necessary tools in order to define and to deal with quantum registers, quantum gates and quantum operations. Using an interactive and easily extendible design within the framework of the computer algebra system Maple, the Feynman program is a powerful toolbox not only for teaching the basic and more advanced concepts of quantum information but also for studying their physical realization in the future. To this end, the Feynman program implements a selection of algebraic separability criteria for bipartite and multipartite mixed states as well as the most frequently used entanglement measures from the literature. Additionally, the program supports the work with quantum operations and their associated (Jamiolkowski) dual states. Based on the implementation of several popular decoherence models, we provide tools especially for the quantitative analysis of quantum operations.
As an application of the developed tools we further present two case studies in which the entanglement of two atomic processes is investigated. In particular, we have studied the change of the electron-ion spin entanglement in atomic photoionization and the photon-photon polarization entanglement in the two-photon decay of hydrogen. The results show that both processes are, in principle, suitable for the creation and control of entanglement. Apart from process-specific parameters like initial atom polarization, it is mainly the process geometry which offers a simple and effective instrument to adjust the final state entanglement.
Finally, for the case of the two-photon decay of hydrogenlike systems, we study the difference between nonlocal quantum correlations, as given by the violation of the Bell inequality and the concurrence as a true entanglement measure.