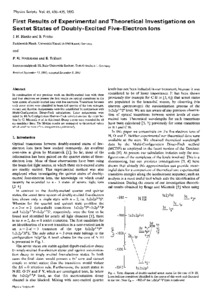 In continuation of our previous work on doubly-excited ions with three and four electrons we present the first results on optical transitions in the term system of doubly-excited ions with five electrons. Transitions between such sextet states were identified in beam-foil spectra of the ions nitrogen, oxygen and fluorine. Assignments were first established by comparison with
Multi-Configuration Dirac-Fock calculations. Later assignments were aided by Multi-Configuration Hartree-Fock calculations (see the contribution by G. Miecznik et al. in this issue). Decay curves were recorded for all six candidate lines. The lifetime results are compared to theoretical values
which confirm most of the assignments qualitatively.