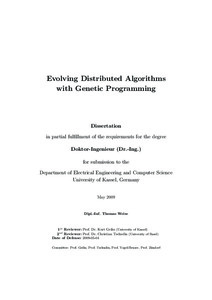 Distributed systems are one of the most vital components of the economy. The most prominent example is probably the internet, a constituent element of our knowledge society. During the recent years, the number of novel network types has steadily increased. Amongst others, sensor networks, distributed systems composed of tiny computational devices with scarce resources, have emerged. The further development and heterogeneous connection of such systems imposes new requirements on the software development process. Mobile and wireless networks, for instance, have to organize themselves autonomously and must be able to react to changes in the environment and to failing nodes alike. Researching new approaches for the design of distributed algorithms may lead to methods with which these requirements can be met efficiently. In this thesis, one such method is developed, tested, and discussed in respect of its practical utility.

Our new design approach for distributed algorithms is based on Genetic Programming, a member of the family of evolutionary algorithms. Evolutionary algorithms are metaheuristic optimization methods which copy principles from natural evolution. They use a population of solution candidates which they try to refine step by step in order to attain optimal values for predefined objective functions.

The synthesis of an algorithm with our approach starts with an analysis step in which the wanted global behavior of the distributed system is specified. From this specification, objective functions are derived which steer a Genetic Programming process where the solution candidates are distributed programs. The objective functions rate how close these programs approximate the goal behavior in multiple randomized network simulations. The evolutionary process step by step selects the most promising solution candidates and modifies and combines them with mutation and crossover operators. This way, a description of the global behavior of a distributed system is translated automatically to programs which, if executed locally on the nodes of the system, exhibit this behavior.

In our work, we test six different ways for representing distributed programs, comprising adaptations and extensions of well-known Genetic Programming methods (SGP, eSGP, and LGP), one bio-inspired approach (Fraglets), and two new program representations called Rule-based Genetic Programming (RBGP, eRBGP) designed by us. We breed programs in these representations for three well-known example problems in distributed systems: election algorithms, the distributed mutual exclusion at a critical section, and the distributed computation of the greatest common divisor of a set of numbers.

Synthesizing distributed programs the evolutionary way does not necessarily lead to the envisaged results. In a detailed analysis, we discuss the problematic features which make this form of Genetic Programming particularly hard. The two Rule-based Genetic Programming approaches have been developed especially in order to mitigate these difficulties. In our experiments, at least one of them (eRBGP) turned out to be a very efficient approach and in most cases, was superior to the other representations.