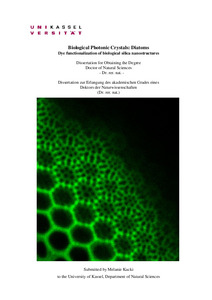 The aim of this work was to produce a variety of fluorescent diatom cell wall material as a basis for spectroscopic investigations of the influence of the photonic structure on the emission of an incorporated laser dye. This goal was achieved by the method of in vivo-fluorochromation, in which the fluorescence dyes are incorporated by the diatom cells during cell wall formation. Several fluorescent dyes (mostly rhodamines) known as strong laser dyes, were tested for a possible application within this method. The results of this work show that half of the tested rhodamines can be applied for an in vivo-fluorochromation of diatom cells. For a successful incorporation into the diatom cell wall, a relatively low toxicity to diatom cells is necessary. Replacement of the carbon acid function at the carboxyphenyl ring of the rhodamine by a methyl or ethylester function showed to convert a rhodamine of relatively low toxicity to a rhodamine leading to severe lethal effects within the cells. In contrast to their carbon acid forms, which posses a net neutral charge of the molecule, rhodamine esters exhibit a net positive charge. The enhanced toxicological effects seem to be due to an increased accumulation of positive charged rhodamines within the mitochondria, an increased hydrophobicity due to the attachment of an alkyl substituent, an increased retention time of the dyes within the mitochondria and a therefore stronger negative effect on the mitochondrial membrane bound energy processes of the diatom cell. Therefore rhodamines with a positive net charge deriving from a methyl or ethylester function at the carboxy phenyl ring instead of a carbon acid substituent showed not to be suitable for long-term investigations/ biomineralization studies of diatoms. Investigations performed on diatom species of different orders showed that rhodamine 19, rhodamine B, and rhodamine 101 can presumably be successfully applied for in vivo-fluorochromation to all diatom species. The results obtained here can help to find further laser dyes for an in vivo-fluorochromation of diatom cells and therefore for the production of fluorescent nanostructural elements for a detailed optical investigation of the diatom cell wall.
First optical measurements performed on in vivo-fluorochromated cell walls did not give any hints concerning the photonic structure of the diatom cell. Cell wall parts with different nanostructural elements were investigated and by comparison of the obtained fluorescence emission spectra, no special features that might derive from photonic structural effects could be observed. Results concerning the concentration dependent shifts within the emission spectra, as well as the decrease of fluorescence intensity of the stained cell wall structures with increasing dye concentration, depict that several effects occurring by interaction of the molecules within the cell wall can have an impact on the technical application of fluorescent cell walls. It can be assumed that the investigation of the photonic crystal behaviour and the possibility to achieve laser action within the diatom cell wall can be hampered by molecular interactions. The results give hints to prevent such obstacles.
Comparison of the recent findings and state of the art of in vivo-fluorochromation of diatom cell wall material, make clear that the here presented results are of importance and can offer a considerable contribution to the development and establishment of new biosilification markers, for diatoms as well as for other biosilifying organisms.