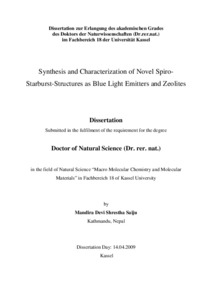 Spiro-starburst-structures with symmetric globular structures in forms of first and second generations that readily form stable amorphous glasses have been synthesized and then characterised in this work. During the synthesis of these materials, possibilities of the extension of the chains of the phenyl rings in 2,2’,7 and 7’-positions of the central core of the spirobifluorene as well as the 2’,7 and 7’-positions of the terminal spirobifluorene units of the spiro-starburst-structures have been investigated so that solubilities and morphologies of the compounds are not negatively influenced. Their morphological properties have been explored by recording their decomposition temperature and glass transition temperature. These compounds possessing two perpendicular arrangement of the two molecular halves show high glass transition temperature (Tg), which is one of the most important parameter indicating the stability of the amorphous state of the material for optoelectronic devices like organic light emitting diodes. Within the species of second generation compounds, for example, 4-spiro3 shows the highest Tg (330 °C) and the highest branching degree. When one [4B(SBF)SBF-SBF 84] or two [4SBFSBF-SBF 79] terminal spirobifluorene units are removed, the Tg decreases to 318 °C and 307 °C respectively. Photo absorption and fluorescence spectra and cyclic voltammetry measurements are taken in account to characterize the optoelectronic properties of the compounds. Spiro-starburst-structures emit radiation in the blue region of the visible spectrum. The peak maxima of absorption and emission spectra are observed to be at higher wavelength in the molecules with longer chromophore chains than in the molecules with shorter chromophore chains. Excitation spectra are monitored with their emission peak maxima. The increasing absorbing species in molecule leads to increasing molar extinction coefficient. In the case of 4B(TP)SBF-SBF 53 and 4B(SBF)SBF-SBF 84, the greater values of the molar extinction coefficients (43*104 and 44*104 L mol-1 cm-1 respectively) are the evidences of the presence of four times octiphenyl conjugation rings and eight times terminal fluorene units respectively. The optical properties of solid states of these compounds in the form of thin film indicate that the intermolecular interaction and aggregation of individual molecules in neat amorphous films are effectively hindered by their sterically demanding structures. Accordingly, in solid state, they behave like isolated molecules in highly dilute solution. Cyclic voltammetry measurements of these compounds show electrochemically reversibility and stability. Furthermore, the zeolitic nature (host-guest) of the molecular sieve of the synthesized spiro-starburst-structures has been analysed by thermogravimetric analysis method.