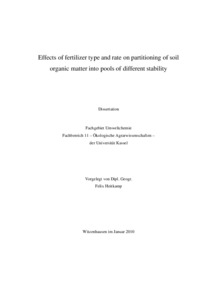 Type and rate of fertilizers influence the level of soil organic carbon (Corg) and total nitrogen (Nt) markedly, but the effect on C and N partitioning into different pools is open to question. The objectives of the present work were to:
(i) quantify the impact of fertilizer type and rate on labile, intermediate and passive C and N pools by using a combination of biological, chemical and mathematical methods;
(ii) explain previously reported differences in the soil organic matter (SOM) levels between soils receiving farmyard manure with or without biodynamic preparations by using Corg time series and information on SOM partitioning; and
(iii) quantify the long-term and short-term dynamics of SOM in density fractions and microbial biomass as affected by fertilizer type and rate and determine the incorporation of crop residues into labile SOM fractions.
Samples were taken from a sandy Cambisol from the long-term fertilization trial in Darmstadt, Germany, founded in 1980. The nine treatments (four field replicates) were: straw incorporation plus application of mineral fertilizer (MSI) and application of rotted farmyard manure with (DYN) or without (FYM) addition of biodynamic preparations, each at high (140 – 150 kg N ha-1 year-1; MSIH, DYNH, FYMH), medium (100 kg N ha-1 year-1; MSIM, DYNM, FYMM) and low (50 – 60 kg N ha-1 year-1; MSIL, DYNL, FYML) rates.
The main findings were:
(i) The stocks of Corg (t ha-1) were affected by fertilizer type and rate and increased in the order MSIL (23.6), MSIM (23.7), MSIH (24.2) < FYML (25.3) < FYMM (28.1), FYMH (28.1). Stocks of Nt were affected in the same way (C/N ratio: 11). Storage of C and N in the modelled labile pools (turnover times: 462 and 153 days for C and N, respectively) were not influenced by the type of fertilizer (FYM and MSI) but depended significantly (p ≤ 0.05) on the application rate and ranged from 1.8 to 3.2 t C ha 1 (7 – 13% of Corg) and from 90 to 140 kg N ha-1 (4-5% of Nt). In the calculated intermediate pool (C/N ratio 7), stocks of C were markedly higher in FYM treatments (15-18 t ha-1) compared to MSI treatments (12-14 t ha-1). This showed that differences in SOM stocks in the sandy Cambisol induced by fertilizer rate may be short-lived in case of changing management, but differences induced by fertilizer type may persist for decades.
(ii) Crop yields, estimated C inputs (1.5 t ha-1 year-1) with crop residue, microbial bio¬mass C (Cmic, 118 – 150 mg kg-1), microbial biomass N (17 – 20 mg kg-1) and labile C and N pools did not differ significantly between FYM and DYN treatments. However, labile C increased linearly with application rate (R2 = 0.53) from 7 to 11% of Corg. This also applied for labile N (3.5 to 4.9% of Nt). The higher contents of Corg in DYN treatments existed since 1982, when the first sampling was conducted for all individual treatments. Contents of Corg between DYN and FYM treatments con-verged slightly since then. Furthermore, at least 30% of the difference in Corg was located in the passive pool where a treatment effect could be excluded. Therefore, the reported differences in Corg contents existed most likely since the beginning of the experiment and, as a single factor of biodynamic agriculture, application of bio-dynamic preparations had no effect on SOM stocks.
(iii) Stocks of SOM, light fraction organic C (LFOC, ρ ≤ 2.0 g cm-3), light fraction organic N and Cmic decreased in the order FYMH > FYML > MSIH, MSIL for all sampling dates in 2008 (March, May, September, December). However, statistical significance of treatment effects differed between the dates, probably due to dif-ferences in the spatial variation throughout the year. The high proportion of LFOC on total Corg stocks (45 – 55%) highlighted the importance of selective preservation of OM as a stabilization mechanism in this sandy Cambisol. The apparent turnover time of LFOC was between 21 and 32 years, which agreed very well with studies with substantially longer vegetation change compared to our study.
Overall, both approaches; (I) the combination of incubation, chemical fractionation and simple modelling and (II) the density fractionation; provided complementary information on the partitioning of SOM into pools of different stability. The density fractionation showed that differences in Corg stocks between FYM and MSI treatments were mainly located in the light fraction, i.e. induced by higher recalcitrance of the organic input in the FYM treatments. Moreover, the use of the combination of biological, chemical and mathematical methods indicated that effects of fertilizer rate on total Corg and Nt stocks may be short-lived, but that the effect of fertilizer type may persist for longer time spans in the sandy Cambisol.