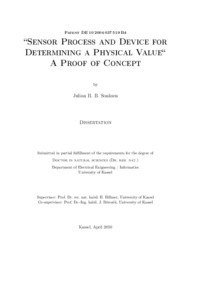 At present, a fraction of 0.1 - 0.2% of the patients undergoing surgery become aware during the process. The situation is referred to as anesthesia awareness and is obviously very traumatic for the person experiencing it. The reason for its occurrence is mostly an insufficient dosage of the narcotic Propofol combined with the incapability of the technology monitoring the depth of the patient’s anesthetic state to notice the patient becoming aware.
A solution can be a highly sensitive and selective real time monitoring device for Propofol based on optical absorption spectroscopy. Its working principle has been postulated by Prof. Dr. habil. H. Hillmer and formulated in DE10 2004 037 519 B4, filed on Aug 30th, 2004. It consists of the exploitation of Intra Cavity Absorption effects in a two mode laser system.
In this Dissertation, a two mode external cavity semiconductor laser, which has been developed previously to this work is enhanced and optimized to a functional sensor. Enhancements include the implementation of variable couplers into the system and the implementation of a collimator arrangement into which samples can be introduced. A sample holder and cells are developed and characterized with a focus on compatibility with the measurement approach. Further optimization concerns the overall performance of the system: scattering sources are reduced by re-splicing all fiber-to-fiber connections, parasitic cavities are eliminated by suppressing the Fresnel reflexes of all one fiber ends by means of optical isolators and wavelength stability of the system is improved by the implementation of thermal insulation to the Fiber Bragg Gratings (FBG). The final laser sensor is characterized in detail thermally and optically. Two separate modes are obtained at 1542.0 and 1542.5 nm, tunable in a range of 1nm each. Mode Full Width at Half Maximum (FWHM) is 0.06nm and Signal to Noise Ratio (SNR) is as high as 55 dB. Independent of tuning the two modes of the system can always be equalized in intensity, which is important as the delicacy of the intensity equilibrium is one of the main sensitivity enhancing effects formulated in DE10 2004 037 519 B4.
For the proof of concept (POC) measurements the target substance Propofol is diluted in the solvents Acetone and DiChloroMethane (DCM), which have been investigated for compatibility with Propofol beforehand. Eight measurement series (two solvents, two cell lengths and two different mode spacings) are taken, which draw a uniform picture: mode intensity ratio responds linearly to an increase of Propofol in all cases. The slope of the linear response indicates the sensitivity of the system. The eight series are split up into two groups: measurements taken in long cells and measurements taken in short cells.