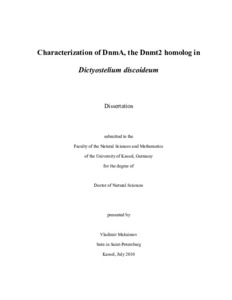 Characterization of DnmA, the Dnmt2 homolog in Dictyostelium discoideum

Eukaryotic DNA m5C methyltransferases (MTases) play a major role in many epigenetic regulatory processes like genomic imprinting, X-chromosome inactivation, silencing of transposons and gene expression. Members of the two DNA m5C MTase families, Dnmt1 and Dnmt3, are relatively well studied and many details of their biological functions, biochemical properties as well as interaction partners are known. In contrast, the biological functions of the highly conserved Dnmt2 family, which appear to have non-canonical dual substrate specificity, remain enigmatic despite the efforts of many researchers.
The genome of the social amoeba Dictyostelium encodes Dnmt2-homolog, the DnmA, as the only DNA m5C MTase which allowed us to study Dnmt2 function in this organism without interference by the other enzymes. The dnmA gene can be easily disrupted but the knock-out clones did not show obvious phenotypes under normal lab conditions, suggesting that the function of DnmA is not vital for the organism. It appears that the dnmA gene has a low expression profile during vegetative growth and is only 5-fold upregulated during development. Fluorescence microscopy indicated that DnmA-GFP fusions were distributed between both the nucleus and cytoplasm with some enrichment in nuclei. Interestingly, the experiments showed specific dynamics of DnmA-GFP distribution during the cell cycle. The proteins colocalized with DNA in the interphase and were mainly removed from nuclei during mitosis.
DnmA functions as an active DNA m5C MTase in vivo and is responsible for weak but detectable DNA methylation of several regions in the Dictyostelium genome. Nevertheless, gel retardation assays showed only slightly higher affinity of the enzyme to dsDNA compared to ssDNA and no specificity towards various sequence contexts, although weak but detectable specificity towards AT-rich sequences was observed. This could be due to intrinsic curvature of such sequences. Furthermore, DnmA did not show denaturant-resistant covalent complexes with dsDNA in vitro, although it could form covalent adducts with ssDNA. Low binding and methyltransfer activity in vitro suggest the necessity of additional factor in DnmA function. Nevertheless, no candidates could be identified in affinity purification experiments with different tagged DnmA fusions. In this respect, it should be noted that tagged DnmA fusion preparations from Dictyostelium showed somewhat higher activity in both covalent adduct formation and methylation assays than DnmA expressed in E.coli. Thus, the presence of co-purified factors cannot be excluded. The low efficiency of complex formation by the recombinant enzyme and the failure to define interacting proteins that could be required for DNA methylation in vivo, brought up the assumption that post-translational modifications could influence target recognition and enzymatic activity. Indeed, sites of phosphorylation, methylation and acetylation were identified within the target recognition domain (TRD) of DnmA by mass spectrometry. For phosphorylation, the combination of MS data and bioinformatic analysis revealed that some of the sites could well be targets for specific kinases in vivo. Preliminary 3D modeling of DnmA protein based on homology with hDNMT2 allowed us to show that several identified phosphorylation sites located on the surface of the molecule, where they would be available for kinases. The presence of modifications almost solely within the TRD domain of DnmA could potentially modulate the mode of its interaction with the target nucleic acids.
DnmA was able to form denaturant-resistant covalent intermediates with several Dictyostelium tRNAs, using as a target C38 in the anticodon loop. The formation of complexes not always correlated with the data from methylation assays, and seemed to be dependent on both sequence and structure of the tRNA substrate. The pattern, previously suggested by the Helm group for optimal methyltransferase activity of hDNMT2, appeared to contribute significantly in the formation of covalent adducts but was not the only feature of the substrate required for DnmA and hDNMT2 functions. Both enzymes required Mg2+ to form covalent complexes, which indicated that the specific structure of the target tRNA was indispensable. The dynamics of covalent adduct accumulation was different for DnmA and different tRNAs. Interestingly, the profiles of covalent adduct accumulation for different tRNAs were somewhat similar for DnmA and hDNMT2 enzymes. According to the proposed catalytic mechanism for DNA m5C MTases, the observed denaturant-resistant complexes corresponded to covalent enamine intermediates. The apparent discrepancies in the data from covalent complex formation and methylation assays may be interpreted by the possibility of alternative pathways of the catalytic mechanism, leading not to methylation but to exchange or demethylation reactions. The reversibility of enamine intermediate formation should also be considered. Curiously, native gel retardation assays showed no or little difference in binding affinities of DnmA to different RNA substrates and thus the absence of specificity in the initial enzyme binding. The meaning of the tRNA methylation as well as identification of novel RNA substrates in vivo should be the aim of further experiments.