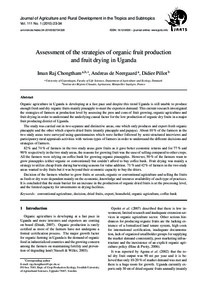 Organic agriculture in Uganda is developing at a fast pace and despite this trend Uganda is still unable to produce enough fresh and dry organic fruits mainly pineapple to meet the exporters demand. This current research investigated the strategies of farmers at production level by assessing the pros and cons of fruit growing, organic agriculture and fruit drying in order to understand the underlying causal factor for the low production of organic dry fruits in a major fruit producing district of Uganda.
The study was carried out in two separate and distinctive areas; one which only produces and export fresh organic pineapple and the other which exports dried fruits (mainly pineapple and papaya). About 10% of the farmers in the two study areas were surveyed using questionnaires which were further followed by semi-structured interviews and participatory rural appraisals activities with various types of farmers in order to understand the different decisions and strategies of farmers.
82% and 74% of farmers in the two study areas grew fruits as it gave better economic returns and for 77% and 90% respectively in the two study areas, the reasons for growing fruit was the ease of selling compared to other crops. All the farmers were relying on coffee husk for growing organic pineapples. However, 50% of the farmers want to grow pineapples (either organic or conventional) but couldn't afford to buy coffee husk. Fruit drying was mainly a strategy to utilize cheap fruits during harvesting seasons for value addition. 71% and 42% of farmers in the two study areas wanted to dry fruits but it was beyond their economic capacity to buy the driers.
Decision of the farmers whether to grow fruits or cereals, organic or conventional agriculture and selling the fruits as fresh or dry were dependent mainly on the economic, knowledge and resource availability of each type of practices. It is concluded that the main barrier for an increase in the production of organic dried fruits is at the processing level, and the limited capacity for investments in drying facilities.