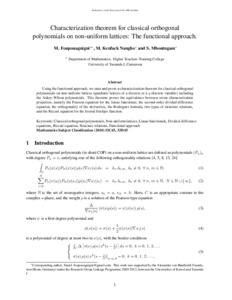 Using the functional approach, we state and prove a characterization theorem for classical orthogonal polynomials on non-uniform lattices (quadratic lattices of a discrete or a q-discrete variable) including the Askey-Wilson polynomials. This theorem proves the equivalence between seven characterization properties, namely the Pearson equation for the linear functional, the second-order divided-difference equation, the orthogonality of the derivatives, the Rodrigues formula, two types of structure relations,and the Riccati equation for the formal Stieltjes function.