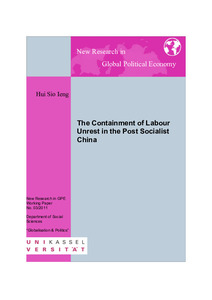 The Containment of Labour Unrest in the Post Socialist China

Due to its transition from the socialist mode of production to the capitalist mode, workers in China have been exposed to the exploitative class relations that they hardly experienced before. The working class is now assuming a subordinate position in the relations of production while the capitalist class remains in the dominant position. As a consequence, workers’ protests are constantly emerging and class conflicts are exacerbating in the contemporary China. I have set out to study in this paper how the party-state in China contains labour unrest through the All China Federation of Trade Unions (the ACFTU), which I argue is a state apparatus that performs the ideological, political and economic functions in different situations.
There has been an ongoing academic debate on if the ACFTU is defending workers’ interests. Some scholars have expressed optimism while some have taken a dim view. Drawing on Poulantzas’ theory of capitalist state, I hope to make contribution to this debate by demonstrating that the ACFTU is under some circumstances serving the short term interests of workers as individuals, but not the economic and political interests of workers as a class. Instead of organizing workers to overcome the effects of isolation or forming a class for itself, the ACFTU attempts to contain labour unrest and reproduce their subordination in the relations of production.