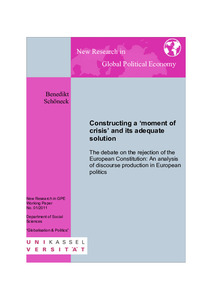 Constructing a ‘moment of crisis’ and its adequate solution

(The debate on the rejection of the European Constitution: An analysis of discourse production in European politics)

The rejection of the European Constitution marks an important crystallization point for debate about the European Union (EU) and the integration process. The European Constitution was envisaged as the founding document of a renewed and enlarged European Union and thus it was rather assumed to find wide public support. Its rejection was not anticipated. The negative referenda in France and the Netherlands therefore led to a controversial debate about the more fundamental meaning and the consequences of the rejection both for the immediate state of affairs as well as for the further integration process. The rejection of the Constitution and the controversy about its correct interpretation therefore present an intriguing puzzle for political analysis.
Although the treaty rejection was taken up widely in the field of European Studies, the focus of existing analyses has predominantly been on explaining why the current situation occurred. Underlying these approaches is the premise that by establishing the reasons for the rejection it is possible to derive the ‘true’ meaning of the event for the EU integration process. In my paper I rely on an alternative, discourse theoretical approach which aims to overcome the positivist perspective dominating the existing analyses. I argue that the meaning of the event ‘treaty rejection’ is not fixed or inherent to it but discursively constructed. The critical assessment of this concrete meaning-production is of high relevance as the specific meaning attributed to the treaty rejection effectively constrains the scope for supposedly ‘reasonable’ options for action, both in the concrete situation and in the further European integration process more generally. I will argue that the overall framing suggests a fundamental technocratic approach to governance from part of the Commission. Political struggle and public deliberation is no longer foreseen as the concrete solutions to the citizens’ general concerns are designed by supposedly apolitical experts. Through the communicative diffusion and the active implementation of this particular model of governance the Commission shapes the future integration process in a more substantial way than is obvious from its seemingly limited immediate problem-solving orientation of overcoming the ‘constitutional crisis’.
As the European Commission is a central actor in the discourse production my analysis focuses on the specific interpretation of the situation put forward by the Commission. In order to work out the Commission’s particular take on the event I conducted a frame analysis (according to Benford/Snow) on a body of key sources produced in the context of coping with the treaty rejection.