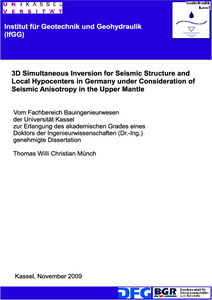 By the 3D tomographic investigations that have been done here for the crust and the upper mantle, considering the influence of anisotropy, a gap for the investigations in Europe has been closed.

These investigations have been done with the SSH-Inversionprogram of Prof. Dr. M. Koch, which is able to compute simultaneously the seismic structure and hypocenters.

At the beginning, a precise analysis of the residuals (RES, the difference between calculated and observed arrivaltime) has been done which confirmed the existence of anisotropy for Pn-phases.
The recognized sinusoidal distribution has been compensated by an extension of the SSH-program by an ellipse with a slow and rectangular fast axis with azimuth to correct the Pn-velocities.

The azimuth of the fast axis has been fixed by the application of the simultaneous inversion at 25° - 27° with a variation of the velocities at +- 2.5 about an average value at 8 km/s. This new value differs from the old one at 35°, recognized in the initial residual analysis. This depends on the new computed hypocenters together with the structure.

The application of the elliptical correction has resulted in a better fit of the vertical layered 1D-Model, compared to the results of preceding seismological experiments and 1D and 2D investigations.

The optimal result of the 1D-inversion has been used as initial starting model for the 3D-inversions to compute the three dimensional picture of the seismic structure of the Crust and Upper Mantle.

The simultaneous inversion has showed an optimization of the relocalization of the hypocenters and the reconstruction of the seismic structure in comparison to the geology and tectonic, as described by other investigations.

The investigations for the seismic structure and the relocalization have been confirmed by several different tests.
First, synthetic traveltime data are computed with an anisotropic variation and inverted with and without anisotropic correction.

Further, tests with randomly disturbed hypocenters and traveltime data have been proceeded to verify the influence of the initial values onto the relocalization accuracy and onto the seismic structure and to test for a further improvement by the application of the anisotropic correction.

Finally, the results of the work have been applied onto the Waldkirch earthquake in 2004 to compare the isotropic and the anisotropic relocalization with the initial optimal one to verify whether there is some improvement.