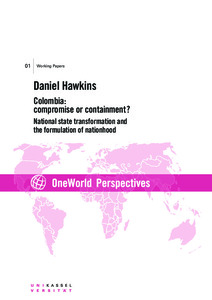 (National state transformation and the formulation of nationhood)

The design, reformulation, and final signing of Plan Colombia by the then US President, Bill Clinton, on the 13 July 2000 initiated in a new era of the US State´s involvement in supposedly sovereign-territorial issues of Colombian politics. The implementation of Plan Colombia there-on-after brought about a major realignment of political-military scales and terrains of conflict that have renewed discourses concerning the contemporary imperialist interests of key US-based but transnationally-projected social forces, leading to arguments that stress the invigorated geo-political dimension of present-day strategies of capitalist accumulation.
With the election of Álvaro Uribe Vélez as Colombian President in May 2002 and his pledge to strengthen the national military campaign aganist the region´s longest-surviving insurgency guerrilla group, Las FARC-EP, as well as other guerrilla factions, combined with a new focus on establishing the State project of “Democratic Security”; the military realm of governance and attempts to ensure property security and expanding capitalist investment have attained precedence in Colombia´s national political domains.
This working paper examines the interrelated nature of Plan Colombia -as a binational and indeed regional security strategy- and Uribe´s Democratic Security project as a means of showing the manner in which they have worked to pave the way for the implementation of a new “total market” regime of accumulation, based on large-scale agro-industrial investment which is accelerated through processes of accumulation via dispossession. As such, the political and social reconfigurations involved manifest the multifarious scales of governance that become intertwined in incorporating neoliberalism in specific regions of the world economy. Furthermore, the militarisation-securitisation of such policies also illustrate the explicit contradictions of neoliberalism in a peripheral context, where coercion seems to prevail, something which leads to a profound questioning of the extent to which neoliberalism can be thought of as a hegemonic politico-economic project.