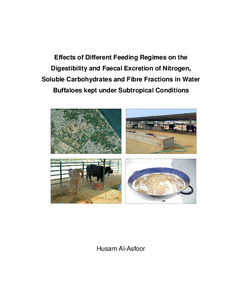 Effects of Different Feeding Regimes on the Digestibility and Faecal Excretion of Nitrogen, Soluble Carbohydrates and Fibre Fractions in Water Buffaloes kept under Subtropical Conditions

In the course of the ‘Livestock Revolution’, extension and intensification of, among others, ruminant livestock production systems are current phenomena, with all their positive and negative side effects. Manure, one of the inevitable secondary products of livestock rearing, is a valuable source of plant nutrients and its skillful recycling to the soil-plant interface is essential for soil fertility, nutrient - and especially phosphorus - uses efficiency and the preservation or re-establishment of environmentally sustainable farming systems, for which organic farming systems are exemplarily.
Against this background, the PhD research project presented here, which was embedded in the DFG-funded Research Training Group 1397 ‘Regulation of soil organic matter and nutrient turnover in organic agriculture ’ investigated possibilities to manipulate the diets of water buffalo (Bubalus bubalis L.) so as to produce manure of desired quality for organic vegetable production, without affecting the productivity of the animals used.
Consisting of two major parts, the first study (chapter 2) tested the effects of diets differing in their ratios of carbon (C) to nitrogen (N) and of structural to non-structural carbohydrates on the quality of buffalo manure under subtropical conditions in Sohar, Sultanate of Oman. To this end, two trials were conducted with twelve water buffalo heifers each, using a full Latin Square design. One control and four tests diets were examined during three subsequent 7 day experimental periods preceded each by 21 days adaptation. Diets consisted of varying proportions of Rhodes grass hay, soybean meal, wheat bran, maize, dates, and a commercial concentrate to achieve a (1) high C/N and high NDF (neutral detergent fibre)/SC (soluble carbohydrate) ratio (HH), (2) low C/N and low NDF/SC ratio (LL); (3) high C/N and low NDF/SC ratio (HL) and (4) low C/N and high NDF/SC (LH) ratio. Effects of these diets, which were offered at 1.45 times maintenance requirements of metabolizable energy, and of individual diet characteristics, respectively, on the amount and quality of faeces excreted were determined and statistically analysed. The faeces produced from diets HH and LL were further tested in a companion PhD study (Mr. K. Siegfried) concerning their nutrient release in field experiments with radish and cabbage.
The second study (chapter 3) focused on the effects of the above-described experimental diets on the rate of passage of feed particles through the gastrointestinal tract of four randomly chosen animals per treatment. To this end, an oral pulse dose of 683 mg fibre particles per kg live weight marked with Ytterbium (Yb; 14.5 mg Yb g-1 organic matter) was dosed at the start of the 7 day experimental period which followed 21 days of adaptation. During the first two days a sample for Yb determination was kept from each faecal excretion, during days 3 – 7 faecal samples were kept from the first morning and the first evening defecation only. Particle passage was modelled using a one-compartment age-dependent Gamma-2 model. In both studies individual feed intake and faecal excretion were quantified throughout the experimental periods and representative samples of feeds and faeces were subjected to proximate analysis following standard protocols.
In the first study the organic matter (OM) intake and excretion of LL and LH buffaloes were significantly lower than of HH and HL animals, respectively. Digestibility of N was highest in LH (88%) and lowest in HH (74%). While NDF digestibility was also highest in LH (85%) it was lowest in LL (78%). Faecal N concentration was positively correlated (P≤0.001) with N intake, and was significantly higher in faeces excreted by LL than by HH animals. Concentrations of fibre and starch in faecal OM were positively affected by the respective dietary concentrations, with NDF being highest in HH (77%) and lowest in LL (63%). The faecal C/N ratio was positively related (P≤0.001) to NDF intake; C/N ratios were 12 and 7 for HH and LL (P≤0.001), while values for HL and LH were 11.5 and 10.6 (P>0.05).
The results from the second study showed that dietary N concentration was positively affecting faecal N concentration (P≤0.001), while there was a negative correlation with the faecal concentration of NDF (P≤0.05) and the faecal ratios of NDF/N and C/N (P≤0.001). Particle passage through the mixing compartment was lower (P≤0.05) for HL (0.033 h-1) than for LL (0.043 h-1) animals, while values of 0.034 h-1 and 0.038 h-1 were obtained for groups LH and HH. At 55.4 h, total tract mean retention time was significantly (P≤0.05) lower in group LL that in all other groups where these values varied between 71 h (HH) and 79 h (HL); this was probably due to the high dietary N concentration of diet LL which was negatively correlated with time of first marker appearance in faeces (r= 0.84, P≤0.001), while the dietary C concentration was negatively correlated with particle passage through the mixing compartment (r= 0.57, P≤0.05).
The results suggest that manure quality of river buffalo heifers can be considerably influenced by diet composition. Despite the reportedly high fibre digestion capacity of buffalo, digestive processes did not suppress the expression of diet characteristics in the faeces. This is important when aiming at producing a specific manure quality for fertilization purposes in (organic) crop cultivation. Although there was a strong correlation between the ingestion and the faecal excretion of nitrogen, the correlation between diet and faecal C/N ratio was weak. To impact on manure mineralization, the dietary NDF and N concentrations seem to be the key control points, but modulating effects are achieved by the inclusion of starch into the diet. Within the boundaries defined by the animals’ metabolic and (re)productive requirements for energy and nutrients, diet formulation may thus take into account the abiotically and biotically determined manure turnover processes in the soil and the nutrient requirements of the crops to which the manure is applied, so as to increase nutrient use efficiency along the continuum of the feed, the animal, the soil and the crop in (organic) farming systems.

DFG(Deutsche Forschungsgemeinschaft), Training Group 1397 under the title of 'Regulation of soil organic matter and nutrient turnover in organic agriculture'