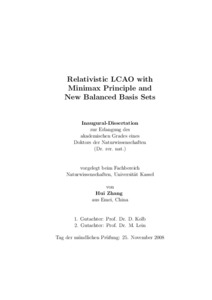 Relativistic density functional theory is widely applied in molecular calculations with heavy atoms, where relativistic and correlation effects are on the same footing. Variational stability of the Dirac Hamiltonian is a very important field of research from the beginning of relativistic molecular calculations on, among efforts for accuracy, efficiency, and density functional formulation, etc. Approximations of one- or two-component methods and searching for suitable basis sets are two major means for good projection power against the negative continuum.

The minimax two-component spinor linear combination of atomic orbitals (LCAO)
is applied in the present work for both light and super-heavy one-electron systems, providing good approximations in the whole energy spectrum, being close to the benchmark minimax finite element method (FEM) values and without spurious and contaminated states, in contrast to the presence of these artifacts in the traditional four-component spinor LCAO. The variational stability assures that minimax LCAO is bounded from below.

New balanced basis sets, kinetic and potential defect balanced (TVDB), following the minimax idea, are applied with the Dirac Hamiltonian. Its performance in the same super-heavy one-electron quasi-molecules shows also very good projection capability against variational collapse, as the minimax LCAO is taken as the best projection to compare with. The TVDB method has twice as many basis coefficients as four-component spinor LCAO, which becomes now linear and overcomes the disadvantage of great time-consumption in the minimax method.

The calculation with both the TVDB method and the traditional LCAO method
for the dimers with elements in group 11 of the periodic table investigates their difference. New bigger basis sets are constructed than in previous research, achieving high accuracy within the functionals involved. Their difference in total energy is much smaller than the basis incompleteness error,
showing that the traditional four-spinor LCAO keeps enough projection power from the numerical atomic orbitals and is suitable in research on relativistic quantum chemistry.

In scattering investigations for the same comparison purpose, the failure of the traditional LCAO method of providing a stable spectrum with increasing size of basis sets is contrasted to the TVDB method, which contains no spurious states already without pre-orthogonalization of basis sets. Keeping the same conditions including the accuracy of matrix elements shows that the variational instability prevails over the linear dependence of the basis sets. The success of the TVDB method manifests its capability not only in relativistic quantum chemistry but also for scattering and under the influence of strong external electronic and magnetic fields.

The good accuracy in total energy with large basis sets and the good projection property encourage wider research on different molecules, with better functionals, and on small effects.