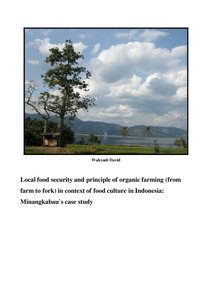 Local food security and principle of organic farming (from farm to fork) in context of food culture in Indonesia: Minangkabau's case study

The basic idea behind improving local food security consists of two paths; first, accessibility (price, stock) and second, availability (quantity and biodiversity); both are perquisites to the provision of nutrients and a continuous food supply with locally available resources. The objectives of this thesis are to investigate if indigenous knowledge still plays an important role in traditional farming in the Minangkabau`s culture, thus supporting local food security. If the indigenous knowledge still plays a role in food culture in the Minangkabau`s culture which is linked to the matrilineal role and leads to a sound nutrition. Further, it should be tested if marantau influences traditional farming and food culture in Minangkabau`s, and if the local government plays a role in changing of traditional farming systems and food culture. Furthermore this thesis wants to prove if education and gender are playing a role in changing traditional farming system and food culture, and if the mass media affects traditional farming systems and food culture for the Minangkabau.
The study was completed at four locations in West Sumatera; Nagari Ulakan (NU) (coastal area), Nagari Aia Batumbuak (NAB) (hilly area), Nagari Padang Laweh Malalo (NPLM) (lake area), Nagari Pandai Sikek (NPS) (hilly area). The rainfall ranged from 1400- 4800 mm annually with fertile soils. Data was collected by using PRA (Participatory Rural Appraisal) to investigate indigenous knowledge (IK) and its interactions, which is also combining with in depth-interview, life history, a survey using semi-structured-questionnaire, pictures, mapping, and expert interview. The data was collected from June - September 2009 and June 2010. The materials are; map of area, list of names, questionnaires, voices recorder, note book, and digital camera. The sampling method was snowball sampling which resulted in the qualitative and quantitative data taken. For qualitative data, ethnography and life history was used. For quantitative, a statistical survey with a semi-structured questionnaire was used. 50 respondents per each site participated voluntarily. Data was analyzed by performing MAXQDA 10, and F4 audio analysis software (created and developed by Philip-University Marburg). The data is clustered based on causality.
The results show that; the role of IK on TFS (traditional farming system) shown on NPLM which has higher food crop biodiversity in comparison to the other three places even though it has relatively similar temperature and rainfall. This high food crop biodiversity is due to the awareness of local people who realized that they lived in unfavourable climate and topography; therefore they are more prepared for any changes that may occur. Carbohydrate intake is 100 % through rice even though they are growing different staple crops. Whereas most of the people said in the interviews that not eating rice is like not really eating for them. In addition to that, mothers still play an important role in kitchen activities. But when the agriculture income is low, mothers have to decide whether to change the meals or to feel insecure about their food supply. Marantau yields positive impact through the remittances it provides to invest on the farm. On the other hand, it results in fewer workers for agriculture, and therefore a negative impact on the transfer of IK. The investigation showed that the local government has a PTS (Padi Tanam Sabatang) programme which still does not guarantee that the farmers are getting sufficient revenue from their land. The low agricultural income leads to situation of potential food insecurity. It is evident that education is equal among men and women, but in some cases women tend to leave school earlier because of arranged marriages or the distances of school from their homes. Men predominantly work in agriculture and fishing, while women work in the kitchen. In NAB, even though women work on farmland they earn less then men. Weaving (NPS) and kitchen activity is recognized as women’s work, which also supports the household income. Mass media is not yielding any changes in TFS and food culture in these days. The traditional farming system has changed because of intensive agricultural extension which has introduced new methods of agriculture for the last three decades (since the 1980’s). There is no evidence that they want to change any of their food habits because of the mass media despite the lapau activity which allows them to get more food choices, instead preparing traditional meal at home.
The recommendations of this thesis are:
1) The empowerment of farmers.
It is regarding the self sufficient supply of manure, cooperative seed, and sustainable farm management. Farmers should know – where are they in their state of knowledge – so they can use their local wisdom and still collaborate with new sources of knowledge. Farmers should learn the prognosis of supply and demand next prior to harvest. There is a need for farm management guidelines; that can be adopted from both their local wisdom and modern knowledge.
2) Increase of non-agricultural income
Increasing the non-agricultural income is strongly recommended. The remittances can be invested on non-agricultural jobs.
3) The empowerment of the mother.
The mother plays an important role in farm to fork activities; the mother can be an initiator and promoter of cultivating spices in the backyard. Improvement of nutritional knowledge through information and informal public education can be done through arisan ibu-ibu and lapau activity.
The challenges to apply these recommendations are:
1) The gap between institutions and organizations of local governments. There is more than one institution involved in food security policy.
2) Training and facilities for field extension agriculture (FEA) is needed because the rapid change of interaction between local government and farmer’s dependent on this agency.