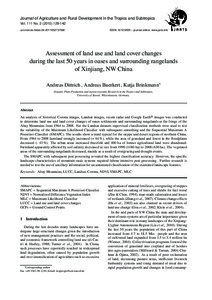 Assessment of land use and land cover changes during the last 50 years in oases and surrounding rangelands of Xinjiang, NW China

An analysis of historical Corona images, Landsat images, recent radar and Google Earth® images was conducted to determine land use and land cover changes of oases settlements and surrounding rangelands at the fringe of the Altay Mountains from 1964 to 2008. For the Landsat datasets supervised classification methods were used to test the suitability of the Maximum Likelihood Classifier with subsequent smoothing and the Sequential Maximum A Posteriori Classifier (SMAPC). The results show a trend typical for the steppe and desert regions of northern China. From 1964 to 2008 farmland strongly increased (+ 61%), while the area of grassland and forest in the floodplains decreased (- 43%). The urban areas increased threefold and 400 ha of former agricultural land were abandoned. Farmland apparently affected by soil salinity decreased in size from 1990 (1180 ha) to 2008 (630 ha). The vegetated areas of the surrounding rangelands decreased, mainly as a result of overgrazing and drought events.The SMAPC with subsequent post processing revealed the highest classification accuracy. However, the specific landscape characteristics of mountain oasis systems required labour intensive post processing. Further research is needed to test the use of ancillary information for an automated classification of the examined landscape features.