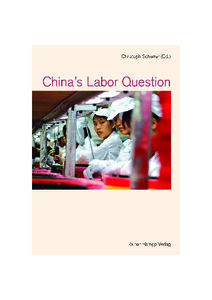 The Honda workers’ strike in 2010 attracted world wide attention. It was one of thousands of labor disputes that happen every year in China, but it was the first major calling for the right of workers to represent themselves in collective bargaining. The question of representation is therefore the main topic of the book. The various contributors to this volume share the view that the Chinese party-state takes the protest against social inequality seriously. It has enacted many laws aimed at channeling dissatisfaction into safe channels. The implementation of these laws, however, lags behind and these laws do not include the right of freedom of association. Without this right, super-exploitation will persist and the system of labor relations will remain prone to eruptive forms of protest. The first part of the book provides an overview of the economic context of Chinese labor relations, the transformation of class-relations, the evolution of labor law, and government policies intended to set a wage floor. Based on extensive field research, the second part looks at the evolution of labor relations at the industry level. In the third part, the focus shifts to the Corporate Social Responsibility agenda in China. The final part looks at the connection between land reform and social inequality.