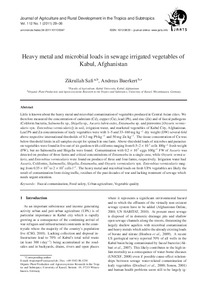 Little is known about the heavy metal and microbial contamination of vegetables produced in Central Asian cities. We therefore measured the concentration of cadmium (Cd), copper (Cu), lead (Pb), and zinc (Zn) and of faecal pathogens (Coliform bacteria, Salmonella sp., Shigella sp., Ascaris lubricoides, Entamoeba sp. and pinworms [Oxyuris vermicularis syn. Enterobius vermicularis]) in soil, irrigation water, and marketed vegetables of Kabul City, Afghanistan. Leaf Pb and Zn concentrations of leafy vegetables were with 1–5 and 33–160 mg kg^{-1} dry weight (DW) several-fold above respective international thresholds of 0.3 mg Pb kg^{-1} and 50 mg Zn kg^{-1}. The tissue concentration of Cu was below threshold limits in all samples except for spinach in one farm. Above-threshold loads of microbes and parasites on vegetables were found in five out of six gardens with coliforms ranging from 0.5–2 × 10^7 cells 100g^{-1} fresh weight (FW), but no Salmonella and Shigella were found. Contamination with 0.2 × 10^7 eggs 100g^{-1} FW of Ascaris was detected on produce of three farms and critical concentrations of Entamoeba in a single case, while Oxyuris vermicularis, and Enterobius vermicularis were found on produce of three and four farms, respectively. Irrigation water had Ascaris, Coliforms, Salmonella, Shigella, Entamoeba, and Oxyuris vermicularis syn. Enterobius vermicularis ranging from 0.35 × 10^7 to 2 × 10^7 cells l^{-1}. The heavy metal and microbial loads on fresh UPA vegetables are likely the result of contamination from rising traffic, residues of the past decades of war and lacking treatment of sewage which needs urgent attention.