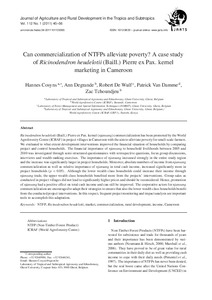 Ricinodendron heudelotii (Baill.) Pierre ex Pax. kernel (njansang) commercialization has been promoted by the World Agroforestry Centre (ICRAF) in project villages in Cameroon with the aim to alleviate poverty for small-scale farmers. We evaluated to what extent development interventions improved the financial situation of households by comparing project and control households. The financial importance of njansang to household livelihoods between 2005 and 2010 was investigated through semi-structured questionnaires with retrospective questions, focus group discussions, interviews and wealth-ranking exercises. The importance of njansang increased strongly in the entire study region and the increase was significantly larger in project households. Moreover, absolute numbers of income from njansang commercialization as well as relative importance of njansang in total cash income, increased significantly more in project households (p < 0.05). Although the lower wealth class households could increase their income through njansang trade, the upper wealth class households benefited more from the projects' interventions. Group sales as conducted in project villages did not lead to significantly higher prices and should be reconsidered. Hence, promotion of njansang had a positive effect on total cash income and can still be improved. The corporative actors for njansang commercialization are encouraged to adapt their strategies to ensure that also the lower wealth class households benefit from the conducted project interventions. In this respect, frequent project monitoring and impact analysis are important tools to accomplish this adaptation.