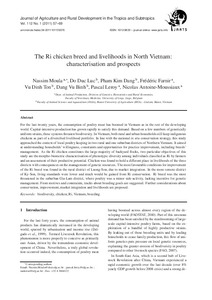 The Ri chicken breed and livelihoods in North Vietnam: characterization and prospects

For the last twenty years, the consumption of poultry meat has boomed in Vietnam as in the rest of the developing world. Capital-intensive production has grown rapidly to satisfy this demand. Based on a few numbers of genetically uniform strains, these systems threaten biodiversity. In Vietnam, both rural and urban households still keep indigenous chickens as part of a diversified livelihood portfolio. In line with the national in situ conservation strategy, this study approached the context of local poultry keeping in two rural and one suburban districts of Northern Vietnam. It aimed at understanding households’ willingness, constraints and opportunities for practice improvement, including breeds’ management. As the Ri chicken constitutes the large majority of backyard flocks, two particular objectives of this study are the morpho-biometric characterisation of phenotypic diversity among individuals classified as Ri by farmers and an assessment of their productive potential. Chicken was found to hold a different place in livelihoods of the three districts with consequences on the management of genetic resources. The most favourable conditions for improvement of the Ri breed was found in the rural district of Luong-Son, due to market integration. In the more remote district of Ky-Son, living standards were lower and much would be gained from Ri conservation. Ri breed was the most threatened in the suburban Gia-Lam district, where poultry was a minor side-activity, lacking incentive for genetic management. From motives and constraints, tracks about breeding goals are suggested. Further considerations about conservation, improvement, market integration and livelihoods are proposed.