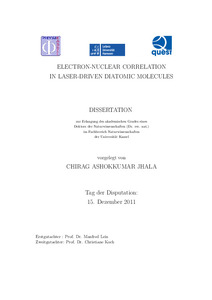 The interaction of short intense laser pulses with atoms/molecules produces a multitude of highly nonlinear processes requiring a non-perturbative treatment. Detailed study of these highly nonlinear processes by numerically solving the time-dependent Schrodinger equation becomes a daunting task when the number of degrees of freedom is large. Also the coupling between the electronic and nuclear degrees of freedom further aggravates the computational problems. In the present work we show that the time-dependent Hartree (TDH) approximation, which neglects the correlation effects, gives unreliable description of the system dynamics both in the absence and presence of an external field. A theoretical framework is required that treats the electrons and nuclei on equal footing and fully quantum mechanically. To address this issue we discuss two approaches, namely the multicomponent density functional theory (MCDFT) and the multiconfiguration time-dependent Hartree (MCTDH) method, that go beyond the TDH approximation and describe the correlated electron-nuclear dynamics accurately. In the MCDFT framework, where the time-dependent electronic and nuclear densities are the basic variables, we discuss an algorithm to calculate the exact Kohn-Sham (KS) potentials for small model systems. By simulating the photodissociation process in a model hydrogen molecular ion, we show that the exact KS potentials contain all the many-body effects and give an insight into the system dynamics. In the MCTDH approach, the wave function is expanded as a sum of products of single-particle functions (SPFs). The MCTDH method is able to describe the electron-nuclear correlation effects as the SPFs and the expansion coefficients evolve in time and give an accurate description of the system dynamics. We show that the MCTDH method is suitable to study a variety of processes such as the fragmentation of molecules, high-order harmonic generation, the two-center interference effect, and the lochfrass effect. We discuss these phenomena in a model hydrogen molecular ion and a model hydrogen molecule. Inclusion of absorbing boundaries in the mean-field approximation and its consequences are discussed using the model hydrogen molecular ion. To this end, two types of calculations are considered: (i) a variational approach with a complex absorbing potential included in the full many-particle Hamiltonian and (ii) an approach in the spirit of time-dependent density functional theory (TDDFT), including complex absorbing potentials in the single-particle equations. It is elucidated that for small grids the TDDFT approach is superior to the variational approach.