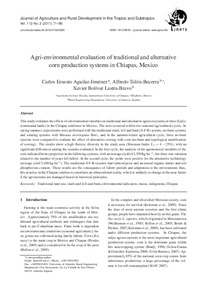 This study evaluates the effects of environmental variables on traditional and alternative agroecosystems in three Ejidos (communal lands) in the Chiapas rainforest in Mexico. The tests occurred within two seasonal agricultural cycles. In spring-summer, experiments were performed with the traditional slash, fell and burn (S-F-B) system, no-burn systems and rotating systems with Mucuna deeringiana Bort., and in the autumn-winter agricultural cycle, three no-burn systems were compared to evaluate the effect of alternative sowing with corn (no-burn and topological modification of sowing). The results show a high floristic diversity in the study area (S_S = 4 - 23%), with no significant differences among the systems evaluated. In the first cycle, the analysis of the agronomical variables of the corn indicated better properties in the fallowing systems, with an average yield of 1950 kg ha^‑1, but there was variation related to the number of years left fallow. In the second cycle, the yields were positive for the alternative technology (average yield 3100 kg ha^‑1). The traditional S-F-B systems had reduced pests and increased organic matter and soil phosphorous content. These results are the consequence of fallow periods and adaptation to the environment; thus, this practice in the Chiapas rainforest constitutes an ethnocultural reality, which is unlikely to change in the near future if the agrosystems are managed based on historical principles.