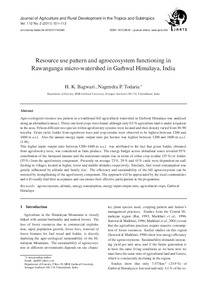 Resource use pattern and agroecosystem functioning in Rawanganga micro-watershed in Garhwal Himalaya, India

Agro-ecological resource use pattern in a traditional hill agricultural watershed in Garhwal Himalaya was analysed along an altitudinal transect. Thirty one food crops were found, although only 0.5% agriculture land is under irrigation in the area. Fifteen different tree species within agroforestry systems were located and their density varied from 30-90 trees/ha. Grain yield, fodder from agroforest trees and crop residue were observed to be highest between 1200 and 1600 m a.s.l. Also the annual energy input- output ratio per hectare was highest between 1200 and 1600 m a.s.l. (1.46).
This higher input- output ratio between 1200-1600 m a.s.l. was attributed to the fact that green fodder, obtained from agroforestry trees, was considered as farm produce. The energy budget across altitudinal zones revealed 95% contribution of the farmyard manure and the maximum output was in terms of either crop residue (35%) or fodder (55%) from the agroforestry component. Presently on average 23%, 29% and 41% cattle were dependent on stall feeding in villages located at higher, lower and middle altitudes respectively. Similarly, fuel wood consumption was greatly influenced by altitude and family size. The efficiency and sustainability of the hill agroecosystem can be restored by strengthening of the agroforestry component. The approach will be appreciated by the local communities and will readily find their acceptance and can ensure their effective participation in the programme.