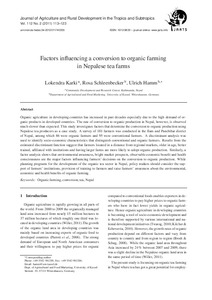 Organic agriculture in developing countries has increased in past decades especially due to the high demand of organic products in developed countries. The rate of conversion to organic production in Nepal, however, is observed much slower than expected. This study investigates factors that determine the conversion to organic production using Nepalese tea producers as a case study. A survey of 181 farmers was conducted in the Ilam and Panchthar district of Nepal, among which 86 were organic farmers and 95 were conventional farmers. A discriminant analysis was used to identify socio-economic characteristics that distinguish conventional and organic farmers. Results from the estimated discriminant function suggest that farmers located in a distance from regional markets, older in age, better trained, affiliated with institutions and having larger farms are more likely to adopt organic production. Similarly, a factor analysis shows that environmental awareness, bright market prospects, observable economic benefit and health consciousness are the major factors influencing farmers’ decisions on the conversion to organic production. While planning programs for the development of the organic tea sector in Nepal, policy makers should consider the support of farmers’ institutions, provision of training to farmers and raise farmers’ awareness about the environmental, economic and health benefits of organic farming.