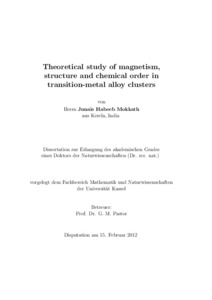 Research on transition-metal nanoalloy clusters composed of a few atoms is fascinating
by their unusual properties due to the interplay among the structure, chemical order and magnetism.
Such nanoalloy clusters, can be used to construct nanometer devices
for technological applications by manipulating their
remarkable magnetic, chemical and optical properties. Determining the nanoscopic features
exhibited by the magnetic alloy clusters signifies the need for a systematic global and local exploration of
their potential-energy surface in order to identify all the relevant
energetically low-lying magnetic isomers.

In this thesis the sampling of the potential-energy surface has been performed
by employing the state-of-the-art spin-polarized density-functional theory
in combination with graph theory and the basin-hopping global optimization techniques.
This combination is vital for a quantitative analysis of the quantum mechanical energetics.

The first approach, i.e., spin-polarized density-functional theory together with
the graph theory method, is applied to study the Fe$_m$Rh$_n$ and Co$_m$Pd$_n$
clusters having $N = m+n \leq 8$ atoms. We carried out a thorough and systematic sampling of
the potential-energy surface by taking into account all possible initial cluster topologies,
all different distributions of the two kinds of atoms within the cluster,
the entire concentration range between the pure limits,
and different initial magnetic configurations such as ferro- and anti-ferromagnetic coupling.
The remarkable magnetic properties shown by FeRh and CoPd nanoclusters are
attributed to the extremely reduced coordination number together with the charge transfer
from 3$d$ to 4$d$ elements.

The second approach, i.e., spin-polarized density-functional theory together with
the basin-hopping method is applied to study the small Fe$_6$, Fe$_3$Rh$_3$ and Rh$_6$ and
the larger Fe$_{13}$, Fe$_6$Rh$_7$ and Rh$_{13}$ clusters
as illustrative benchmark systems. This method is able to identify the
true ground-state structures of Fe$_6$ and Fe$_3$Rh$_3$ which were not obtained by
using the first approach. However, both approaches predict a similar cluster for the
ground-state of Rh$_6$. Moreover, the computational time taken by this approach is found
to be significantly lower than the first approach. The ground-state structure of Fe$_{13}$
cluster is found to be an icosahedral structure,
whereas Rh$_{13}$ and Fe$_6$Rh$_7$ isomers relax into cage-like and layered-like structures, respectively.
All the clusters display a remarkable variety of structural and magnetic behaviors.
It is observed that the isomers having similar shape with
small distortion with respect to each other can exhibit quite different magnetic moments.
This has been interpreted as a probable artifact of spin-rotational symmetry breaking
introduced by the spin-polarized GGA. The possibility of combining the
spin-polarized density-functional theory with some other global optimization
techniques such as minima-hopping method could be the next step in this
direction. This combination is expected to be an ideal sampling approach
having the advantage of avoiding efficiently the search over irrelevant regions of the potential energy surface.