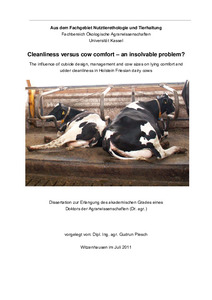 (The influence of cubicle design, management and cow sizes on lying comfort and udder cleanliness in Holstein Friesian dairy cows)

Cubicle should provide good resting comfort as well as clean udders. Dairy cows in cubicle houses often face a restrictive environment with regard to resting behaviour, whereas cleanliness may still be impaired. This study aimed to determine reliable behavioural measures regarding resting comfort applicable in on-farm welfare assessments. Furthermore, relationships between cubicle design, cow sizes, management factors and udder cleanliness (namely teats and teat tips) were investigated.
Altogether 15 resting measures were examined in terms of feasibility, inter-observer reliability (IOR) and consistency of results per farm over time. They were recorded during three farm visits on farms in Germany and Austria with cubicle, deep litter and tie stall systems. Seven measures occurred to infrequently to allow reliable recording within a limited observation time. IOR was generally acceptable to excellent except for 'collisions during lying down', which only showed good IOR after improvement of the definition. Only three measures were acceptably repeatable over time: 'duration of lying down', 'percentage of collisions during lying down' and 'percentage of cows lying partly or completely outside lying area'. These measures were evaluated as suitable animal based welfare measures regarding resting behaviour in the framework of an on-farm welfare assessment protocol.
The second part of the thesis comprises a cross-sectional study on resting comfort and cow cleanliness including 23 Holstein Friesian dairy herds with very low within-farm variation in cubicle measures. Height at withers, shoulder width and diagonal body length were measured in 79-100 % of the cows (herd size 30 to115 cows). Based on the 25 % largest animals, compliance with recommendations for cubicle measures was calculated. Cleanliness of different body parts, the udder, teats and teat tips was assessed for each cow in the herd prior to morning milking. No significant correlation was found between udder soiling and teat or teat tip soiling on herd level. The final model of a stepwise regression regarding the percentage of dirty teats per farm explained 58.5 % the variance and contained four factors. Teat dipping after milking which might be associated with an overall clean and accurate management style, deep bedded cubicles, increasing cubicle maintenance times and decreasing compliance concerning total cubicle length predicted lower teat soiling. The final model concerning teat tip soiling explained 46.0 % of the variance and contained three factors. Increasing litter height in the rear part of the cubicle and increased alley soiling which is difficult to explain, predicted for less soiled teat tips, whereas increasing compliance concerning resting length was associated with higher percentages of dirty teat tips. The dependent variable ‘duration of lying down’ was analysed using again stepwise regression. The final model explained 54.8 % of the total variance. Lying down duration was significantly shorter in deep bedded cubicles. Further explanatory though not significant factors in the model were neck-rail height, deep bedding or comfort mattresses versus concrete floor or rubber mats and clearance height of side partitions. In the attempt to create a more comprehensive lying down measure, another analysis was carried out with percentage of ‘impaired lying down’ (i.e. events exceeding 6.3 seconds, with collisions or being interrupted) as dependent variable. The explanatory value of this final model was 41.3 %. An increase in partition length, in compliance concerning cubicle width and the presence of straw within bedding predicted a lower proportion of impaired lying down. The effect of partition length is difficult to interpret, but partition length and height were positively correlated on the study farms, possibly leading to a bigger zone of clear space for pelvis freedom. No associations could be found between impaired lying down and teat or teat tip soiling.
Altogether, in agreement with earlier studies it was found that cubicle dimensions in practice are often inadequate with regard to the body dimensions of the cows, leading to high proportions of impaired lying down behaviour, whereas teat cleanliness is still unsatisfactory. Connections between cleanliness and cow comfort are far from simplistic. Especially the relationship between cubicle characteristics and lying down behaviour apparently is very complex, so that it is difficult to identify single influential factors that are valid for all farm situations. However, based on the results of the present study the use of deep bedded cubicles can be recommended as well as improved management with special regard to cubicle and litter maintenance in order to achieve both better resting comfort and teat cleanliness.