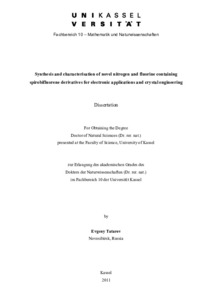 Among organic materials, spirobifluorene derivatives represent a very attractive class of materials for electronic devices. These compounds have high melting points, glass transitions temperatures and morphological stability, which makes these materials suitable for organic electronic applications. In addition, some of spirobifluorenes can form porous supramolecular associations with significant volumes available for the inclusion of guests. These molecular associations based on the spirobifluorenes are noteworthy because they are purely molecular analogues of zeolites and other microporous solids, with potential applications in separation, catalysis, sensing and other areas.
This thesis describes the preparation of new spirobifluorene based substances containing electron-deficient peripheral substitution patterns like pyridines, polyfluorinated arenes and polyfluorinated heteroarenes with the purpose to investigate their optoelectronic properties and their crystalline-state organization.
Thus, new tetra- and hexa-substituted spirobifluorenes bearing terminal pyridyl and tetrafluoropyridyl functional groups as well as extended analogues were successfully synthesized using the Suzuki cross-coupling procedure and the adapted Fagnous direct cross-coupling method. Moreover, a series of unsymmetrical ambipolar compound were designed and synthesized. The direct coupling procedure was also extended to the preparation of materials based on the spirobifluorene core containing polyfluorinated substitution patterns with different functional groups attached at the para position of the terminal rings. It has also been shown that the alkylation of the nitrogen atoms in the tetrasubstituted spirobifluorene bearing 4-pyridyl functional group (S-4Py) leads to the previously not described the viologen-type tetracationic salt. It has also been shown that pyridyl containing spirobifluorenes are able to coordinate with transition metals in order to construct novel self-assembled metallosupramolecular macrocycles. In particular, it has been found that unsymmetrical 2,7-bis-(pyridin-4-yl)-9,9’-spirobifluorene, namely S-2Py, coordinates as the bidentate ligand with a cis-chelated palladium complex to yield the molecular triangle exclusively.
In addition to the preparation, absorption and fluorescence emission properties of the synthesized spirobifluorene derivatives have been investigated. It has also been determined that fluorination of peripheral arms of spirobifluorenes causes a hypsochromic shift of the maximum in the absorption spectrum in regard to the maximum of the fluorine free structural analogue. This effect is probably caused by repulsive H•••F interactions twisting the peripheral fluorinated substituents relatively to the spirobifluorene backbone. An investigation of emission properties revealed that symmetrical nitrogen and fluorine containing spirobifluorenes exhibit relatively high fluorescence quantum yields (on average ca 82%)
Electrochemical properties of the synthesized spirobifluorene derivatives have been investigated by CV and SPEL experiments. It has been determined that the presence of fluorine atoms in peripheral chromophores significantly lowers the HOMO and LUMO levels with regard to non-fluorinated structural analogues. TGA measurements revealed that the spirobifluorenes synthesized in this work exhibit high thermal tolerance where the temperature for 5% weight loss is above 330°C.
In addition to thermal, optical and electrochemical properties, the crystalline state organization of synthesized spirobifluorenes has been investigated in order to understand the driving forces leading to certain packing motifs as well as the possibility to form the open network crystal structures similar to that of zeolites and other microporous solids.
Detailed investigations of possible intermolecular cohesive forces in the crystal structures of synthesised spirobifluorenes revealed that weak interactions involving fluorine atoms play a significant role to maintain a supramolecular organisation with different topologies and different porosity levels.