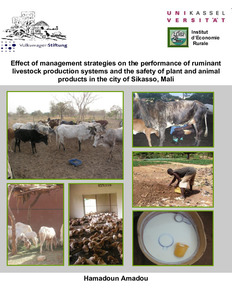 Effect of management strategies on the performance of ruminant livestock production systems and the safety of plant and animal products in the city of Sikasso, Mali

The regional population growth in West Africa, and especially its urban centers, will bring about new and critical challenges for urban development policy, especially in terms of ensuring food security and providing employment for the growing population. (Peri-) urban livestock and vegetable production systems, which can contribute significantly to these endeavours, are limited by various constraints, amongst them limited access to expensive production factors and their (in)efficient use. To achieve sustainable production systems with low consumer health risks, that can meet the urban increased demand, this doctoral thesis determined nutrient use efficiencies in representative (peri-) urban livestock production systems in three West African cities, and investigated potential health risks for consumers ensuing from there.
The field study, which was conducted during July 2007 to December 2009, undertook a comparative analysis of (peri-) urban livestock production strategies across 210 livestock keeping households (HH) in the three West African cities of Kano/Nigeria (84 HH), Bobo Dioulasso/Burkina Faso (63 HH) and Sikasso/Mali (63 HH). These livestock enterprises were belonging to the following three farm types: commercial gardening plus field crops and livestock (cGCL; 88 HH), commercial livestock plus subsistence field cropping (cLsC; 109 HH) and commercial gardening plus semi-commercial livestock (cGscL; 13 HH) which had been classified in a preceding study; they represented the diversity of (peri-) urban livestock production systems in West Africa.
In the study on the efficiency of ruminant livestock production, lactating cowsand sheep herd units were differentiated based on whether feed supplements were offered to the animals at the homestead (Go: grazing only; Gsf: mainly grazing plus some supplement feeding). Inflows and outflows of nutrients were quantified in these herds during 18 months, and the effects of seasonal variations in nutrient availability on animals’ productivity and reproductive performance was determined in Sikasso.
To assess the safety of animal products and vegetables, contamination sources of irrigated lettuce and milk with microbiological contaminants, and of tomato and cabbage with pesticide residues in (peri-) urban agriculture systems of Bobo Dioulasso and Sikasso were characterized at three occasions in 2009. Samples of irrigation water, organic fertilizer and
ix
lettuce were collected in 6 gardens, and samples of cabbage and tomato in 12 gardens; raw and curdled milk were sampled in 6 dairy herds. Information on health risks for consumers of such foodstuffs was obtained from 11 health centers in Sikasso. In (peri-) urban livestock production systems, sheep and goats dominated (P<0.001) in Kano compared to Bobo Dioulasso and Sikasso, while cattle and poultry were more frequent (P<0.001) in Bobo Dioulasso and Sikasso than in Kano. Across cities, ruminant feeding relied on grazing and homestead supplementation with fresh grasses, crop residues, cereal brans and cotton seed cake; cereal grains and brans were the major ingredients of poultry feeds. There was little association of gardens and livestock; likewise field cropping and livestock were rarely integrated. No relation existed between the education of the HH head and the adoption of improved management practices (P>0.05), but the proportion of HH heads with a long-term experience in (peri-) urban agriculture was higher in Kano and in Bobo Dioulasso than in Sikasso (P<0.001). Cattle and sheep fetched highest market prices in Kano; unit prices for goats and chicken were highest in Sikasso.
Animal inflow, outflow and dairy herd growth rates were significantly higher (P<0.05) in the Gsf than in the Go cattle herds. Maize bran and cottonseed expeller were the main feeds offered to Gsf cows as dry-season supplement, while Gsf sheep received maize bran, fresh grasses and cowpea pods. The short periodic transhumance of Go dairy cows help them maintaining their live weight, whereas Gsf cows lost weight during the dry season despite supplement feeding at a rate of 1506 g dry matter per cow and day, resulting in low productivity and reproductive performance. The daily live weight gains of calves and lambs, respectively, were low and not significantly different between the Go and the Gsf system. However, the average live weight gains of lambs were significantly higher in the dry season (P<0.05) than in the rainy season because of the high pressure of gastrointestinal parasites and of Trypanosoma sp. In consequence, 47% of the sheep leaving the Go and Gsf herds died due to diseases during the study period.
Thermo-tolerant coliforms and Escherichia coli contamination levels of irrigation water significantly exceeded WHO recommendations for the unrestricted irrigation of vegetables consumed raw. Microbial contamination levels of lettuce at the farm gate and the market place in Bobo Dioulasso and at the farm gate in Sikasso were higher than at the market place in Sikasso (P<0.05). Pesticide residues were detected in only one cabbage and one tomato sample and were below the maximum residue limit for consumption. Counts of thermo-tolerant coliforms and Escherichia coli were higher in curdled than in raw milk (P<0.05). From 2006 to
x
2009, cases of diarrhea/vomiting and typhoid fever had increased by 11% and 48%, respectively, in Sikasso.
For ensuring economically successful and ecologically viable (peri-) urban livestock husbandry and food safety of (peri-) urban foodstuffs of animal and plant origin, the dissemination and adoption of improved feeding practices, livestock healthcare and dung management are key. In addition, measures fostering the safety of animal products and vegetables including the appropriate use of wastewater in (peri-) urban agriculture, restriction to approve vegetable pesticides and the respect of their latency periods, and passing and enforcement of safety laws is required. Finally, the incorporation of environmentally sound (peri-) urban agriculture in urban planning by policy makers, public and private extension agencies and the urban farmers themselves is of utmost importance.
To enable an efficient (peri-) urban livestock production in the future, research should concentrate on cost-effective feeding systems that allow meeting the animals’ requirement for production and reproduction. Thereby focus should be laid on the use of crop-residues and leguminous forages. The improvement of the milk production potential through crossbreeding of local cattle breeds with exotic breeds known for their high milk yield might be an accompanying option, but it needs careful supervision to prevent the loss of the local trypanotolerant purebreds.