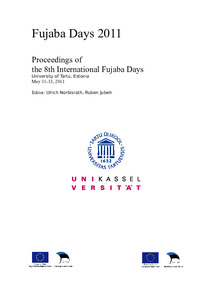 (Proceedings of the 8th International Fujaba Days, University of Tartu, Estonia, May 11-13, 2011)

Fujaba is an Open Source UML CASE tool project started at the software engineering
group of Paderborn University in 1997. In 2002 Fujaba has been redesigned and became the Fujaba Tool Suite with a plug-in architecture allowing developers to add functionality easily while retaining full control over their contributions.
Multiple Application Domains Fujaba followed the model-driven development philosophy right from its beginning in 1997. At the early days, Fujaba had a special focus on code generation from UML diagrams resulting in a visual programming language with a special emphasis on object structure manipulating rules. Today, at least six rather independent tool versions are under development in Paderborn, Kassel, and Darmstadt for supporting (1)
reengineering, (2) embedded real-time systems, (3) education, (4) specification of distributed control systems, (5) integration with the ECLIPSE platform, and (6) MOF-based integration of system (re-) engineering tools.
International Community According to our knowledge, quite a number of research groups
have also chosen Fujaba as a platform for UML and MDA related research activities. In addition, quite a number of Fujaba users send requests for more functionality and extensions.
Therefore, the 8th International Fujaba Days aimed at bringing together Fujaba develop-
ers and Fujaba users from all over the world to present their ideas and projects and to discuss them with each other and with the Fujaba core development team.

Beitrag 3: Supported by the International Graduate School “Dynamic Intelligent Systems” and by the ‘Excellence Initiative’ of the German Federal and State Governments and the Graduate School of Computational Engineering at TU Darmstadt Beitrag 4: This work was developed in the course of the Collaborative Research Center 614 – Self-optimizing Concepts and Structures in Mechanical Engineering – University of Paderborn, and was published on its behalf and funded by the Deutsche Forschungsgemeinschaft. This work was developed in the project "ENTIME: Entwurfstechnik Intelligente Mechatronik" (Design Methods for Intelligent Systems). The project ENTIME is funded by the state of North Rhine Westphalia (NRW), Germany and the EUROPEAN UNION, European Regional Development Fund, "Investing in your future".