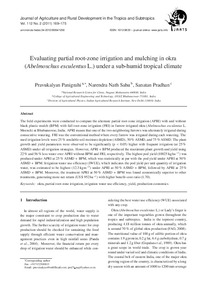 The field experiments were conducted to compare the alternate partial root-zone irrigation (APRI) with and without black plastic mulch (BPM) with full root-zone irrigation (FRI) in furrow-irrigated okra (Abelmoschus esculentus L. Moench) at Bhubaneswar, India. APRI means that one of the two neighbouring furrows was alternately irrigated during consecutive watering. FRI was the conventional method where every furrow was irrigated during each watering. The used irrigation levels were 25% available soil moisture depletion (ASMD), 50% ASMD, and 75% ASMD. The plant growth and yield parameters were observed to be significantly (p < 0.05) higher with frequent irrigation (at 25% ASMD) under all irrigation strategies. However, APRI + BPM produced the maximum plant growth and yield using 22% and 56% less water over APRI without BPM and FRI, respectively. The highest pod yield (10025 kg ha^-1) was produced under APRI at 25% ASMD + BPM, which was statistically at par with the pod yield under APRI at 50% ASMD + BPM. Irrigation water use efficiency (IWUE), which indicates the pod yield per unit quantity of irrigation water, was estimated to be highest (12.3 kg m^-3) under APRI at 50% ASMD + BPM, followed by APRI at 25% ASMD + BPM. Moreover, the treatment APRI at 50% ASMD + BPM was found economically superior to other treatments, generating more net return (US $ 952 ha^-1) with higher benefit–cost ratio (1.70).