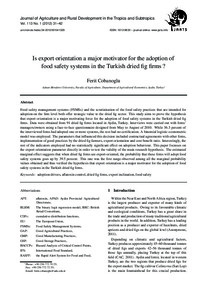 Is export orientation a major motivator for the adoption of food safety systems in the Turkish dried fig firms?