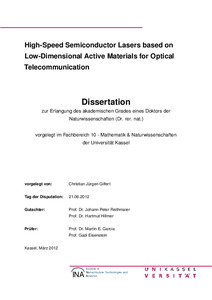 The scope of this work is the fundamental growth, tailoring and characterization of self-organized indium arsenide quantum dots (QDs) and their exploitation as active region for diode lasers emitting in the 1.55 µm range. This wavelength regime is especially interesting for long-haul telecommunications as optical fibers made from silica glass have the lowest optical absorption. Molecular Beam Epitaxy is utilized as fabrication technique for the quantum dots and laser structures. The results presented in this thesis depict the first experimental work for which this reactor was used at the University of Kassel.

Most research in the field of self-organized quantum dots has been conducted in the InAs/GaAs material system. It can be seen as the model system of self-organized quantum dots, but is not suitable for the targeted emission wavelength. Light emission from this system at 1.55 µm is hard to accomplish. To stay as close as possible to existing processing technology, the In(AlGa)As/InP (100) material system is deployed. Depending on the epitaxial growth technique and growth parameters this system has the drawback of producing a wide range of nano species besides quantum dots. Best known are the elongated quantum dashes (QDash). Such structures are preferentially formed, if InAs is deposited on InP. This is related to the low lattice-mismatch of 3.2 %, which is less than half of the value in the InAs/GaAs system. The task of creating round-shaped and uniform QDs is rendered more complex considering exchange effects of arsenic and phosphorus as well as anisotropic effects on the surface that do not need to be dealt with in the InAs/GaAs case. While QDash structures haven been studied fundamentally as well as in laser structures, they do not represent the theoretical ideal case of a zero-dimensional material. Creating round-shaped quantum dots on the InP(100) substrate remains a challenging task. Details of the self-organization process are still unknown and the formation of the QDs is not fully understood yet.

In the course of the experimental work a novel growth concept was discovered and analyzed that eases the fabrication of QDs. It is based on different crystal growth and ad-atom diffusion processes under supply of different modifications of the arsenic atmosphere in the MBE reactor. The reactor is equipped with special valved cracking effusion cells for arsenic and phosphorus. It represents an all-solid source configuration that does not rely on toxic gas supply. The cracking effusion cell are able to create different species of arsenic and phosphorus. This constitutes the basis of the growth concept. With this method round-shaped QD ensembles with superior optical properties and record-low photoluminescence linewidth were achieved. By systematically varying the growth parameters and working out a detailed analysis of the experimental data a range of parameter values, for which the formation of QDs is favored, was found. A qualitative explanation of the formation characteristics based on the surface migration of In ad-atoms is developed. Such tailored QDs are finally implemented as active region in a self-designed diode laser structure. A basic characterization of the static and temperature-dependent properties was carried out. The QD lasers exceed a reference quantum well laser in terms of inversion conditions and temperature-dependent characteristics. Pulsed output powers of several hundred milli watt were measured at room temperature. In particular, the lasers feature a high modal gain that even allowed cw-emission at room temperature of a processed ridge wave guide device as short as 340 µm with output powers of 17 mW. Modulation experiments performed at the Israel Institute of Technology (Technion) showed a complex behavior of the QDs in the laser cavity. Despite the fact that the laser structure is not fully optimized for a high-speed device, data transmission capabilities of 15 Gb/s combined with low noise were achieved. To the best of the author`s knowledge, this renders the lasers the fastest QD devices operating at 1.55 µm.

The thesis starts with an introductory chapter that pronounces the advantages of optical fiber communication in general. Chapter 2 will introduce the fundamental knowledge that is necessary to understand the importance of the active region`s dimensions for the performance of a diode laser. The novel growth concept and its experimental analysis are presented in chapter 3. Chapter 4 finally contains the work on diode lasers.