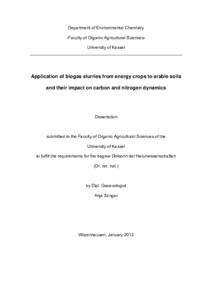 The use of renewable primary products as co-substrate or single substrate for biogas production has increased consistently over the last few years. Maize silage is the preferential energy crop used for fermentation due to its high methane (CH4) yield per hectare. Equally, the by-product, namely biogas slurry (BS), is used with increasing frequency as organic fertilizer to return nutrients to the soil and to maintain or increase the organic matter stocks and soil fertility. Studies concerning the application of energy crop-derived BS on the carbon (C) and nitrogen (N) mineralization dynamics are scarce. Thus, this thesis focused on the following objectives: I) The determination of the effects caused by rainfall patterns on the C and N dynamics from two contrasting organic fertilizers, namely BS from maize silage and composted cattle manure (CM), by monitoring emissions of nitrous oxide (N2O), carbon dioxide (CO2) and CH4 as well as leaching losses of C and N. II) The investigation of the impact of differences in soil moisture content after the application of BS and temperature on gaseous emissions (CO2, N2O and CH4) and leaching of C and N compounds. III) A comparison of BS properties obtained from biogas plants with different substrate inputs and operating parameters and their effect on C and N dynamics after application to differently textured soils with varying application rates and water contents.
For the objectives I) and II) two experiments (experiment I and II) using undisturbed soil cores of a Haplic Luvisol were carried out. Objective III) was studied on a third experiment (experiment III) with disturbed soil samples. During experiment I three rainfall patterns were implemented including constant irrigation, continuous irrigation with periodic heavy rainfall events, and partial drying with rewetting periods. Biogas slurry and CM were applied at a rate of 100 kg N ha-1. During experiment II constant irrigation and an irrigation pattern with partial drying with rewetting periods were carried out at 13.5°C and 23.5°C. The application of BS took place either directly before a rewetting period or one week after the rewetting period stopped. Experiment III included two soils of different texture which were mixed with ten BS’s originating from ten different biogas plants. Treatments included low, medium and high BS-N application rates and water contents ranging from 50% to 100% of water holding capacity (WHC).
Experiment I and II showed that after the application of BS cumulative N2O emissions were 4 times (162 mg N2O-N m-2) higher compared to the application of CM caused by a higher content of mineral N (Nmin) in the form of ammonium (NH4+) in the BS. The cumulative emissions of CO2, however, were on the same level for both fertilizers indicating similar amounts of readily available C after composting and fermentation of organic material. Leaching losses occurred predominantly in the mineral form of nitrate (NO3-) and were higher in BS amended soils (9 mg NO3--N m-2) compared to CM amended soils (5 mg NO3--N m-2). The rainfall pattern in experiment I and II merely affected the temporal production of C and N emissions resulting in reduced CO2 and enhanced N2O emissions during stronger irrigation events, but showed no effect on the cumulative emissions. Overall, a significant increase of CH4 consumption under inconstant irrigation was found. The time of fertilization had no effect on the overall C and N dynamics. Increasing temperature from 13.5°C to 23.5°C enhanced the CO2 and N2O emissions by a factor of 1.7 and 3.7, respectively. Due to the increased microbial activity with increasing temperature soil respiration was enhanced. This led to decreasing oxygen (O2) contents which in turn promoted denitrification in soil due to the extension of anaerobic microsites. Leaching losses of NO3- were also significantly affected by increasing temperature whereas the consumption of CH4 was not affected. The third experiment showed that the input materials of biogas plants affected the properties of the resulting BS. In particular the contents of DM and NH4+ were determined by the amount of added plant biomass and excrement-based biomass, respectively. Correlations between BS properties and CO2 or N2O emissions were not detected. Solely the ammonia (NH3) emissions showed a positive correlation with NH4+ content in BS as well as a negative correlation with the total C (Ct) content. The BS-N application rates affected the relative CO2 emissions (% of C supplied with BS) when applied to silty soil as well as the relative N2O emissions (% of N supplied with BS) when applied to sandy soil. The impacts on the C and N dynamics induced by BS application were exceeded by the differences induced by soil texture. Presumably, due to the higher clay content in silty soils, organic matter was stabilized by organo-mineral interactions and NH4+ was adsorbed at the cation exchange sites. Different water contents induced highest CO2 emissions and therefore optimal conditions for microbial activity at 75% of WHC in both soils. Cumulative nitrification was also highest at 75% and 50% of WHC whereas the relative N2O emissions increased with water content and showed higher N2O losses in sandy soils.
In summary it can be stated that the findings of the present thesis confirmed the high fertilizer value of BS’s, caused by high concentrations of NH4+ and labile organic compounds such as readily available carbon. These attributes of BS’s are to a great extent independent of the input materials of biogas plants. However, considerably gaseous and leaching losses of N may occur especially at high moisture contents. The emissions of N2O after field application corresponded with those of animal slurries.