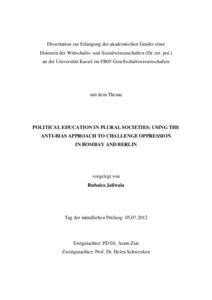 Political Education in Plural Societies: Using the Anti-Bias Approach to Challenge Oppression in Bombay and Berlin

This study addresses the effectivity of the Anti-Bias approach and training methodology as a pedagogical political strategy to challenge oppression among student groups in the cities of Bombay and Berlin. The Anti-Bias trainings conducted within the framework of this study also become the medium through which the perpetuation of oppressive structures by students within and outside the school is investigated.

Empirical data from predominantly qualitative investigations in four secondary schools, two each in Bombay and Berlin, is studied and analysed on the basis of theoretical understandings of prejudice, discrimination and identity. This study builds on insights offered by previous research on prejudices and evaluations of anti-bias and diversity interventions, where the lack of sufficient research and thorough evaluations testing impact has been identified (Levy Paluck, 2006). The theoretical framework suggests that prejudices and discriminatory practices are learnt and performed by individuals over the years by way of pre-existing discourses, and that behaviour and practices can be unlearnt through a multi-step process. It proposes that the discursive practices of students contribute to the constitution of their viable selves and in the constitution of ‘others’. Drawing on this framework, the study demonstrates how student-subjects in Bombay and Berlin perpetuate oppressive discourses by performing their identities and performing identities onto ‘others’. Such performative constitution opens up the agency of the individual, disclosing the shifting and dynamic nature of identities.

The Anti-Bias approach is posited as an alternative to oppressive discourses and a vehicle that encourages and assists the agency of individuals. The theoretical framework, which brings together a psychological approach to prejudice, a structural approach to discrimination and a poststructural approach to identity, facilitates the analysis of the perpetuation of dominant discourses by the students, as well as how they negotiate their way through familiar norms and discourses. Group discussions and interviews a year after the respective trainings serve to evaluate the agency of the students and the extent to which the training impacted on their perceptions, attitudes and behavioural practices.

The study reveals the recurrence of the themes race, religion, gender and sexuality in the representational practices of the students groups in Berlin and Bombay. It demonstrates how students in this study not only perform, but also negotiate and resist oppressive structures. Of particular importance is the role of the school: When schools offer no spaces for discussion, debate and action on contemporary social issues, learning can neither be put into practice nor take on a positive, transformative form. In such cases, agency and resistance is limited and interventionist actions yield little. This study reports the potential of the Anti-Bias approach and training as a tool of political education and action in education. It demonstrates that a single training can initiate change but sustaining change requires long-term strategies and on-going actions. Taking a poststructural perspective, it makes concrete suggestions to adapt and alter the Anti-Bias approach and the implementation of Anti-Bias trainings.