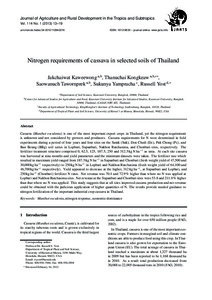 Nitrogen requirements of cassava in selected soils of Thailand

Cassava (Manihot esculenta) is one of the most important export crops in Thailand, yet the nitrogen requirement is unknown and not considered by growers and producers. Cassava requirements for N were determined in field experiments during a period of four years and four sites on the Satuk (Suk), Don Chedi (Dc), Pak Chong (Pc),and Ban Beung (BBg) soil series in Lopburi, Supanburi, Nakhon Ratchasima, and Chonburi sites, respectively. The fertilizer treatment structure comprised 0, 62.5, 125, 187.5, 250 and 312.5 kg N ha^(-1) as urea. At each site cassava was harvested at nine months and yield parameters and the minimum datasets were taken. The fertilizer rate which resulted in maximum yield ranged from 187.5 kg N ha^(-1) in Supanburi and Chonburi (fresh weight yield of 47,500 and 30,000 kg ha^(-1) respectively) to 250 kg N ha^(-1) in Lopburi and Nakhon Ratchasima (fresh weight yield of 64,100 and 46,700 kg ha^(-1) respectively). Yield appeared to decrease at the higher, 312 kg ha^(-1), at Supanburi and Lopburi, and 250 kg ha^(-1) (Chonburi) fertilizer N rates. Net revenue was 70.4 and 72.9 % higher than where no N was appliedLopburi and Nakhon Ratchasima sites. Net revenue at the Supanburi and Chonburi sites were 53.8 and 211.0 % higher than that where no N was applied. This study suggests that at all sites improved cassava production and net revenue could be obtained with the judicious application of higher quantities of N. The results provide needed guidance to nitrogen fertilization of the important industrial crop cassava in Thailand.