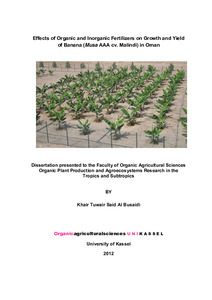 Effects of Organic and Inorganic Fertilizers on Growth and Yield of Banana (Musa AAA cv. Malindi) in Oman

The Sultanate of Oman is located on the south-eastern coast of the Arabian Peninsula, which lies on the south-western tip of the Asian continent. The strategic geographical locations of the Sultanate with its many maritime ports distributed on the Indian Ocean have historically made it one of the Arabian Peninsula leaders in the international maritime trade sector. Intensive trading relationships over long time periods have contributed to the high plant diversity seen in Oman where agricultural production depends entirely on irrigation from groundwater sources. As a consequence of the expansion of the irrigated area, groundwater depletion has increased, leading to the intrusion of seawater into freshwater aquifers. This phenomenon has caused water and soil salinity problems in large parts of the Al-Batinah governorate of Oman and threatens cultivated crops, including banana (Musa spp.). According to the Ministry of Agriculture and Fisheries, the majority of South Al-Batinah farms are affected by salinity (ECe > 4 dS m-1). As no alternative farmland is available, the reclamation of salt-affected soils using simple cultural practices is of paramount importance, but in Oman little scientific research has been conducted to develop such methods of reclamation. This doctoral study was initiated to help filling this research gap, particularly for bananas.
A literature review of the banana cultivation history revealed that the banana germplasm on the Arabian Peninsula is probably introduced from Indonesia and India via maritime routes across the Indian Ocean and the Red Sea.
In a second part of this dissertation, two experiments are described. A laboratory trial conducted at the University of Kassel, in Witzenhausen, Germany from June to July 2010. This incubation experiment was done to explore how C and N mineralization of composted dairy manure and date palm straw differed in alkaline non-saline and saline soils. Each soil was amended with four organic fertilizers: 1) composted dairy manure, 2) manure + 10% date palm straw, 3) manure + 30% date palm straw or 4) date palm straw alone, in addition to un-amended soils as control. The results showed that the saline soil had a lower soil organic C content and microbial biomass C than the non-saline soil. This led to lower mineralization rates of manure and date palm straw in the saline soil. In the non-saline soil, the application of manure and straw resulted in significant increases of CO2 emissions, equivalent to 2.5 and 30% of the added C, respectively. In the non-amended control treatment of the saline soil, the sum of CO2-C reached only 55% of the soil organic C in comparison with the non-saline soil. In which 66% of the added manure and 75% of the added straw were emitted, assuming that no interactions occurred between soil organic C, manure C and straw C during microbial decomposition.
The application of straw always led to a net N immobilization compared to the control. Salinity had no specific effect on N mineralization as indicated by the CO2-C to Nmin ratio of soil organic matter and manure. However, N immobilization was markedly stronger in the saline soil. Date palm straw strongly promoted saprotrophic fungi in contrast to manure and the combined application of manure and date palm straw had synergistic positive effects on soil microorganisms. In the last week of incubation, net-N mineralization was observed in nearly all treatments. The strongest increase in microbial biomass C was observed in the manure + straw treatment. In both soils, manure had no effect on the fungi-specific membrane component ergosterol. In contrast, the application of straw resulted in strong increases of the ergosterol content.
A field experiment was conducted on two adjacent fields at the Agricultural Research Station, Rumais (23°41’15” N, 57°59’1” E) in the South of Al-Batinah Plain in Oman from October 2007 to July 2009. In this experiment, the effects of 24 soil and fertilizer treatments on the growth and productivity of Musa AAA cv. 'Malindi' were evaluated. The treatments consisted of two soil types (saline and amended non-saline), two fertilizer application methods (mixed and ring applied), six fertilizer amendments (1: fresh dairy manure, 2: composted dairy manure, 3: composted dairy manure and 10% date palm straw, 4: composted dairy manure and 30% date palm straw, 5: only NPK, and 6: NPK and micronutrients). Sandy loam soil was imported from another part of Oman to amended the soil in the planting holes and create non-saline conditions in the root-zone.
The results indicate that replacing the saline soil in the root zone by non-saline soil improved plant growth and yield more than fertilizer amendments or application methods. Particularly those plants on amended soil where NPK was applied using the ring method and which received micronutrients grew significantly faster to harvest (339 days), had a higher average bunch weight (9.5 kg/bunch) and were consequently more productive (10.6 tonnes/hectare/cycle) compared to the other treatments.