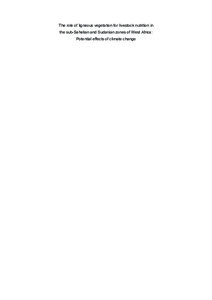 The role of ligneous vegetation for livestock nutrition in the sub-Sahelian and Sudanian zones of West Africa: Potential effects of climate change

The Advisory Group on International Agricultural Research (BEAF) at the German Agency for International Cooperation (GIZ) within the German Ministry for Economic Cooperation (BMZ) for funding the project ALUCCSA (Adaptation of Landuse to Climate Change in Sub-Saharan Africa, project number 07.7860.5-001.00).