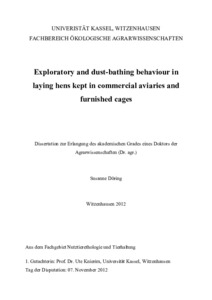 The aim of the present thesis was to identify management factors that affect the extent of exploratory behaviour (ground pecking, scratching) as well as quantitative and qualitative as-pects of dust-bathing behaviour in laying hens kept in commercial furnished cages (‘small group housing’) and aviaries. Based on the results, it should be considered which management measures can be recommended for farmers to enhance hen welfare.
The feasibility of direct observations of dust-bathing behaviour as well as video observations of exploratory and dust-bathing behaviour was tested in two aviaries. The direct observations were judged to be unfeasible under the conditions encountered. For the analysis of the video recordings, different sampling intervals for instantaneous scan sampling, different extents of observation time, and intra- and inter-observer reliabilities were compared and the most ap-propriate observation scheme selected. Applying the selected scheme (observing the first 16 minutes of every hour distributed over two consecutive light days with a sample interval of two minutes), within the range of environmental conditions found in 22 aviaries, pecking, scratching and dust-bathing behaviour was performed on average 25, 2 and 7 % of the obser-vation time. Hen numbers in the litter were positively associated with stocking density and group size. More scratching was performed with increasing litter height as well as in humid litter. If no litter had been provided, thus substrate consisted of dust and faeces, a reduced proportion of dust-bathing was found. The same method was then used in 16 furnished cage systems. On average 12 % of the total hen number were found on the scratching mats. The hens spent 8 % of the observed time pecking at the mat, 4 % dust-bathing and 0.4 % scratch-ing. Higher proportions were found on the mats and more dust-bathing behaviour occurred, if substrate was provided. Also with increasing light intensity and stocking density more hens were observed on the mats. More pecking and scratching occurred in conditions of higher stocking density, probably due to social facilitation, and of increased mat area per hen. With increasing mat numbers per cage less pecking was observed. Wider mats led to increased dust-bathing behaviour.
Finally, 129 dust-baths recorded in 17 aviaries were analysed in detail. On average they lasted 17 minutes, with the tossing phase taking 69 % of this time, including on average 2 vertical wing shakes and 3 scratches with one leg per minute tossing phase. Dust-bath duration de-creased with increasing litter height. Litter type influenced all recorded parameters: dust-bath duration was highest on straw and lowest on fine material and fine material mixed with straw, where on both also the proportion of the tossing phase was lowest. The number of vertical wing shakes during the dust-bath was highest on straw and lowest on fine material mixed with straw as against the frequency of vertical wing shaking that was lowest on straw and highest on fine material. If dust-bathing hens were disturbed twice or more, dust-bathing duration decreased. With increasing light intensity a decreased proportion of the tossing phase as well as a reduced number of vertical wing shakes were recorded. Possibly the light stimulated the hens to dust-bath more often with less tossing behaviour per performance. The observed variation of the dust-bathing parameters could reflect successful adaptation or frustration of the hens.
The litter and light conditions on the investigated farms were predominantly restrictive in terms of stimulation of exploration and dust-bathing behaviour. Thus, it was only possible to analyse possible associations between these factors and exploration and dust-bathing behav-iour within the range found. Based on the results the following management recommendations can be given: To allow hens in furnished cages more normal activity, substrate availability should be improved and mat space and light intensity increased. With regard to aviaries as well litter availability should be improved. Litter height should not be too low. Disturbances during dust-bathing should be prevented, but no influencing factors could be identified.

This work was financially supported by the German Federal Ministry of Food, Agriculture and Consumer Protection (BMELV) through the Federal Agency for Agriculture and Nutrition (BLE), grant number 2807UM016.