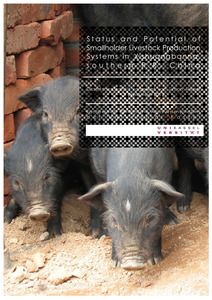 With Chinas rapid economic development during the last decades, the national demand for livestock products has quadrupled within the last 20 years. Most of that increase in demand has been answered by subsidized industrialized production systems, while million of smallholders, which still provide the larger share of livestock products in the country, have been neglected. Fostering those systems would help China to lower its strong urban migration streams, enhance the livelihood of poorer rural population and provide environmentally save livestock products which have a good chance to satisfy customers demand for ecological food. Despite their importance, China’s smallholder livestock keepers have not yet gained appropriate attention from governmental authorities and researchers. However, profound analysis of those systems is required so that adequate support can lead to a better resource utilization and productivity in the sector. To this aim, this pilot study analyzes smallholder livestock production systems in Xishuangbanna, located in southern China. The area is bordered by Lao and Myanmar and geographically counts as tropical region. Its climate is characterized by dry and temperate winters and hot summers with monsoon rains from May to October. While the regionis plain, at about 500 m asl above sea level in the south, outliers of the Himalaya mountains reach out into the north of Xishuangbanna, where the highest peak reaches 2400 m asl. Except of one larger city, Jinghong, Xishuangbanna mainly is covered by tropical rainforest, areas under agricultural cultivation and villages. The major income is generated through inner-Chinese tourism and agricultural production. Intensive rubber plantations are distinctive for the lowland plains while small-scaled traditional farms are scattered in the mountane regions.
In order to determine the current state and possible future chances of smallholder livestock production in that region, this study analyzed the current status of the smallholder livestock sector in the Naban River National Nature Reserve (NRNNR), an area which is largely representative for
the whole prefecture. It covers an area of about 50square kilometer and reaches from 470 up to 2400 m asl. About 5500 habitants of different ethnic origin are situated in 24 villages. All data have been collected between October 2007 and May 2010.

Three major objectives have been addressed in the study:
1. Classifying existing pig production systems and exploring respective pathways for development
2. Quantifying the performance of pig breeding systemsto identify bottlenecks for production
3. Analyzing past and current buffalo utilization to determine the chances and opportunities of buffalo keeping in the future


In order to classify the different pig production s ystems, a baseline survey (n=204, stratified cluster sampling) was carried out to gain data about livestock species, numbers, management practices, cultivated plant species and field sizes as well associo-economic characteristics. Sampling included two clusters at village level (altitude, ethnic affiliation), resulting in 13 clusters of which 13-17 farms were interviewed respectively. Categorical Principal Component Analysis (CatPCA) and a two-step clustering algorithm have been applied to identify determining farm characteristics and assort recorded households into classes of livestock production types. The variables
keep_sow_yes/no, TLU_pig, TLU_buffalo, size_of_corn_fields, altitude_class, size_of_tea_plantationand size_of_rubber_fieldhave been found to be major determinants for the characterization of the recorded farms.
All farms have extensive or semi-intensive livestock production, pigs and buffaloes are predominant livestock species while chicken and aquaculture are available but play subordinate roles for livelihoods. All pig raisers rely on a single local breed, which is known as Small Ear Pig (SMEP) in the region. Three major production systemshave been identified: Livestock-corn based LB; 41%), rubber based (RB; 39%) and pig based (PB;20%) systems. RB farms earn high income from rubber and fatten 1.9 ±1.80 pigs per household (HH), often using purchased pig feed at markets. PB farms own similar sized rubber plantations and raise 4.7 ±2.77 pigs per HH, with fodder mainly being cultivated and collected in theforest. LB farms grow corn, rice and tea and keep 4.6 ±3.32 pigs per HH, also fed with collected and cultivated fodder. Only 29% of all pigs were marketed (LB: 20%; RB: 42%; PB: 25%), average annual mortality was 4.0 ±4.52 pigs per farm (LB: 4.6 ±3.68; RB: 1.9 ±2.14; PB: 7.1 ±10.82). Pig feed mainly consists of banana pseudo stem, corn and rice hives and is prepared in batches about two to three times per week. Such fodder might be sufficient in energy content but lacks appropriate content of protein. Pigs therefore suffer from malnutrition, which becomes most critical in the time before harvest season around October. Farmers reported high occurrences of gastrointestinal parasites in carcasses and often pig stables were wet and filled with manure. Deficits in nutritional and hygienic management are major limits for development and should be the first issues addressed to improve productivity. SME pork was found to be known and referred by local customers in town and by richer lowland farmers. However, high prices and lacking availability of SME pork at local wet-markets were the reasons which limited purchase. If major management constraints are overcome, pig breeders (PB and LB farms) could increase the share of marketed pigs for town markets and provide fatteners to richer RB farmers. RB farmers are interested in fattening pigs for home consumption but do not show any motivation for commercial pig raising.


To determine the productivity of input factors in pig production, eproductive performance, feed quality and quantity as well as weight development of pigs under current management were recorded. The data collection included a progeny history survey covering 184 sows and 437 farrows, bi-weekly weighing of 114 pigs during a 16-months time-span on 21 farms (10 LB and 11 PB) as well as the daily recording of feed quality and quantity given to a defined number of pigs on the same 21 farms. Feed samples of all recorded ingredients were analyzed for their respective nutrient content. Since no literature values on thedigestibility of banana pseudo stem – which is a major ingredient of traditional pig feed in NRNNR – were found, a cross-sectional digestibility trial with 2x4 pigs has been conducted on a station in the research area. With the aid of PRY Herd Life Model, all data have been utilized to determine thesystems’ current (Status Quo = SQ) output and the productivity of the input factor “feed” in terms of saleable life weight per kg DM feed intake and monetary value of output per kg DM feed intake.Two improvement scenarios were simulated, assuming 1) that farmers adopt a culling managementthat generates the highest output per unit input (Scenario 1; SC I) and 2) that through improved feeding, selected parameters of reproduction are improved by 30% (SC II). Daily weight gain averaged 55 ± 56 g per day between day 200 and 600. The average feed energy content of traditional feed mix was 14.92 MJ ME. Age at first farrowing averaged 14.5 ± 4.34 months, subsequent inter-farrowing interval was 11.4 ± 2.73 months. Littersize was 5.8 piglets and weaning age was 4.3 ± 0.99 months. 18% of piglets died before weaning. Simulating pig production at actualstatus, it has been show that monetary returns on inputs (ROI) is negative (1:0.67), but improved (1:1.2) when culling management was optimized so that highest output is gained per unit feed input. If in addition better feeding, controlled mating and better resale prices at fixed dates were simulated, ROI further increased to 1:2.45, 1:2.69, 1:2.7 and 1:3.15 for four respective grower groups. Those findings show the potential of pork production, if basic measures of improvement are applied. Futureexploration of the environment, including climate, market-season and culture is required before implementing the recommended measures to ensure a sustainable development of a more effective and resource conserving pork production in the future.


The two studies have shown that the production of local SME pigs plays an important role in traditional farms in NRNNR but basic constraints are limiting their productivity. However, relatively easy approaches are sufficient for reaching a notable improvement. Also there is a demand for more SME pork on local markets and, if basic constraints have been overcome, pig farmers could turn into more commercial producers and provide pork to local markets. By that, environmentally safe meat can be offered to sensitive consumers while farmers increase their income and lower the risk of external shocks through a more diverse income generating strategy. Buffaloes have been found to be the second important livestock species on NRNNR farms. While they have been a core resource of mixed smallholderfarms in the past, the expansion of rubber tree plantations and agricultural mechanization are reasons for decreased swamp buffalo numbers today. The third study seeks to predict future utilization of buffaloes on different farm types in NRNNR by analyzing the dynamics of its buffalo population and land use changes over time and calculating labor which is required for keeping buffaloes in view of the traction power which can be utilized for field preparation.

The use of buffaloes for field work and the recent development of the egional buffalo population were analyzed through interviews with 184 farmers in 2007/2008 and discussions with 62 buffalo keepers in 2009. While pig based farms (PB; n=37) have abandoned buffalo keeping, 11% of the rubber based farms (RB; n=71) and 100% of the livestock-corn based farms (LB; n=76) kept buffaloes in 2008. Herd size was 2.5 ±1.80 (n=84) buffaloes in early 2008 and 2.2 ±1.69 (n=62) in 2009. Field work on own land was the main reason forkeeping buffaloes (87.3%), but lending work buffaloes to neighbors (79.0%) was also important. Other purposes were transport of goods (16.1%), buffalo trade (11.3%) and meat consumption(6.4%). Buffalo care required 6.2 ±3.00 working hours daily, while annual working time of abuffalo was 294 ±216.6 hours. The area ploughed with buffaloes remained constant during the past 10 years despite an expansion of land cropped per farm.
Further rapid replacement of buffaloes by tractors is expected in the near future. While the work economy is drastically improved by the use of tractors, buffaloes still can provide cheap work force and serve as buffer for economic shocks on poorer farms. Especially poor farms, which lack alternative assets that could quickly be liquidizedin times of urgent need for cash, should not abandon buffalo keeping.


Livestock has been found to be a major part of small mixed farms in NRNNR. The general productivity was low in both analyzed species, buffaloes and pigs. Productivity of pigs can be improved through basic adjustments in feeding, reproductive and hygienic management, and with external support pig production could further be commercialized to provide pork and weaners to local markets and fattening farms. Buffalo production is relatively time intensive, and only will be of importance in the future to very poor farms and such farms that cultivate very small terraces on steep slopes. These should be encouraged to further keep buffaloes. With such measures, livestock production in NRNNR has good chances to stay competitive in the future.