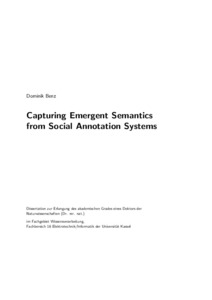 The ongoing growth of the World Wide Web, catalyzed by the increasing
possibility of ubiquitous access via a variety of devices, continues to strengthen
its role as our prevalent information and commmunication medium. However,
although tools like search engines facilitate retrieval, the task of finally making
sense of Web content is still often left to human interpretation. The vision of
supporting both humans and machines in such knowledge-based activities led
to the development of different systems which allow to structure Web resources
by metadata annotations. Interestingly, two major approaches which gained
a considerable amount of attention are addressing the problem from nearly
opposite directions: On the one hand, the idea of the Semantic Web suggests to
formalize the knowledge within a particular domain by means of the "top-down"
approach of defining ontologies. On the other hand, Social Annotation Systems
as part of the so-called Web 2.0 movement implement a "bottom-up" style of
categorization using arbitrary keywords.

Experience as well as research in the characteristics of both systems has shown
that their strengths and weaknesses seem to be inverse: While Social Annotation
suffers from problems like, e. g., ambiguity or lack or precision, ontologies were
especially designed to eliminate those. On the contrary, the latter suffer from a
knowledge acquisition bottleneck, which is successfully overcome by the large
user populations of Social Annotation Systems. Instead of being regarded as
competing paradigms, the obvious potential synergies from a combination of
both motivated approaches to "bridge the gap" between them. These were
fostered by the evidence of emergent semantics, i. e., the self-organized evolution
of implicit conceptual structures, within Social Annotation data. While several
techniques to exploit the emergent patterns were proposed, a systematic analysis
- especially regarding paradigms from the field of ontology learning - is still
largely missing. This also includes a deeper understanding of the circumstances
which affect the evolution processes.
This work aims to address this gap by providing an in-depth study of methods
and influencing factors to capture emergent semantics from Social Annotation
Systems. We focus hereby on the acquisition of lexical semantics from the
underlying networks of keywords, users and resources. Structured along different
ontology learning tasks, we use a methodology of semantic grounding to
characterize and evaluate the semantic relations captured by different methods.
In all cases, our studies are based on datasets from several Social Annotation
Systems.

Specifically, we first analyze semantic relatedness among keywords, and identify
measures which detect different notions of relatedness. These constitute
the input of concept learning algorithms, which focus then on the discovery
of synonymous and ambiguous keywords. Hereby, we assess the usefulness
of various clustering techniques. As a prerequisite to induce hierarchical relationships,
our next step is to study measures which quantify the level of
generality of a particular keyword. We find that comparatively simple measures
can approximate the generality information encoded in reference taxonomies.
These insights are used to inform the final task, namely the creation of concept
hierarchies. For this purpose, generality-based algorithms exhibit advantages
compared to clustering approaches.

In order to complement the identification of suitable methods to capture
semantic structures, we analyze as a next step several factors which influence
their emergence. Empirical evidence is provided that the amount of available
data plays a crucial role for determining keyword meanings. From a different
perspective, we examine pragmatic aspects by considering different annotation
patterns among users. Based on a broad distinction between "categorizers" and
"describers", we find that the latter produce more accurate results. This suggests
a causal link between pragmatic and semantic aspects of keyword annotation.
As a special kind of usage pattern, we then have a look at system abuse and
spam. While observing a mixed picture, we suggest that an individual decision
should be taken instead of disregarding spammers as a matter of principle.
Finally, we discuss a set of applications which operationalize the results of
our studies for enhancing both Social Annotation and semantic systems. These
comprise on the one hand tools which foster the emergence of semantics, and
on the one hand applications which exploit the socially induced relations to
improve, e. g., searching, browsing, or user profiling facilities. In summary,
the contributions of this work highlight viable methods and crucial aspects for
designing enhanced knowledge-based services of a Social Semantic Web.