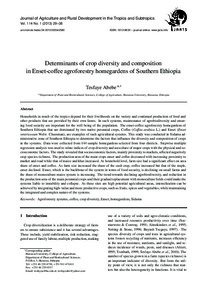 Households in much of the tropics depend for their livelihoods on the variety and continued production of food and other products that are provided by their own farms. In such systems, maintenance of agrobiodiversity and ensuring food security are important for the well being of the population. The enset-coffee agroforestry homegardens of Southern Ethiopia that are dominated by two native perennial crops, Coffee (Coffea arabica L.) and Enset (Enset ventricosum Welw. Cheesman), are examples of such agricultural systems. This study was conducted in Sidama administrative zone of Southern Ethiopia to determine the factors that influence the diversity and composition of crops in the systems. Data were collected from 144 sample homegardens selected from four districts. Stepwise multiple regression analysis was used to relate indices of crop diversity and area share of major crops with the physical and socioeconomic factors. The study revealed that socioeconomic factors, mainly proximity to markets, affected negatively crop species richness. The production area of the main crops enset and coffee decreased with increasing proximity to market and road while that of maize and khat increased. At household level, farm size had a significant effect on area share of enset and coffee. As farm size increased the share of the cash crop, coffee increased but that of the staple, enset declined. Enset, which is the backbone of the system in terms of food security, is declining on small farms and the share of monoculture maize system is increasing. The trend towards declining agrobiodiversity, and reduction in the production area of the main perennial crops and their gradual replacement with monoculture fields could make the systems liable to instability and collapse. As these sites are high potential agricultural areas, intensification can be achieved by integrating high-value and more productive crops, such as fruits, spices and vegetables, while maintaining the integrated and complex nature of the systems.