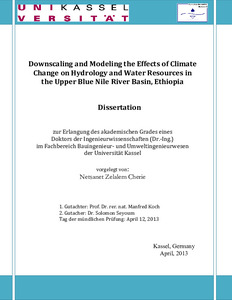 Downscaling and Modeling the Effects of Climate Change on Hydrology and Water Resources in the Upper Blue Nile River Basin, Ethiopia

The Upper Blue Nile River Basin (UBNRB) located in the western part of Ethiopia, between
7° 45’ and 12° 45’N and 34° 05’ and 39° 45’E has a total area of 174962 km2 . More than
80% of the population in the basin is engaged in agricultural activities. Because of the
particularly dry climate in the basin, likewise to most other regions of Ethiopia, the
agricultural productivity depends to a very large extent on the occurrence of the seasonal
rains. This situation makes agriculture highly vulnerable to the impact of potential climate
hazards which are about to inflict Africa as a whole and Ethiopia in particular. To analyze these possible impacts of future climate change on the water resources in the
UBNRB, in the first part of the thesis climate projection for precipitation, minimum and
maximum temperatures in the basin, using downscaled predictors from three GCMs
(ECHAM5, GFDL21 and CSIRO-MK3) under SRES scenarios A1B and A2 have been
carried out. The two statistical downscaling models used are SDSM and LARS-WG,
whereby SDSM is used to downscale ECHAM5-predictors alone and LARS-WG is applied
in both mono-model mode with predictors from ECHAM5 and in multi-model mode with
combined predictors from ECHAM5, GFDL21 and CSIRO-MK3. For the
calibration/validation of the downscaled models, observed as well as NCEP climate data in
the 1970 - 2000 reference period is used. The future projections are made for two time
periods; 2046-2065 (2050s) and 2081-2100 (2090s). For the 2050s future time period the downscaled climate predictions indicate rise of 0.6°C to
2.7°C for the seasonal maximum temperatures Tmax, and of 0.5°C to 2.44°C for the minimum
temperatures Tmin. Similarly, during the 2090s the seasonal Tmax increases by 0.9°C to 4.63°C
and Tmin by 1°C to 4.6°C, whereby these increases are generally higher for the A2 than for the
A1B scenario. For most sub-basins of the UBNRB, the predicted changes of Tmin are larger
than those of Tmax. Meanwhile, for the precipitation, both downscaling tools predict large
changes which, depending on the GCM employed, are such that the spring and summer
seasons will be experiencing decreases between -36% to 1% and the autumn and winter
seasons an increase of -8% to 126% for the two future time periods, regardless of the SRES
scenario used. In the second part of the thesis the semi-distributed, physically based hydrologic model,
SWAT (Soil Water Assessment Tool), is used to evaluate the impacts of the above-predicted
future climate change on the hydrology and water resources of the UBNRB. Hereby the
downscaled future predictors are used as input in the SWAT model to predict streamflow of
the Upper Blue Nile as well as other relevant water resources parameter in the basin.
Calibration and validation of the streamflow model is done again on 1970-2000 measured
discharge at the outlet gage station Eldiem, whereby the most sensitive out the numerous
“tuneable” calibration parameters in SWAT have been selected by means of a sophisticated
sensitivity analysis. Consequently, a good calibration/validation model performance with a
high NSE-coefficient of 0.89 is obtained. The results of the future simulations of streamflow in the basin, using both SDSM- and
LARS-WG downscaled output in SWAT reveal a decline of -10% to -61% of the future
Blue Nile streamflow, And, expectedly, these obviously adverse effects on the future
UBNRB-water availibiliy are more exacerbated for the 2090’s than for the 2050’s, regardless
of the SRES.