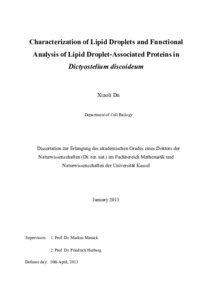 Lipid droplets (LDs) are the universal storage form of fat as a reservoir of metabolic energy in animals, plants, bacteria and single celled eukaryotes. Dictyostelium LD formation was investigated in response to the addition of different nutrients to the growth medium. LDs were induced by adding exogenous cholesterol, palmitic acid (PA) as well as growth in bacterial suspension, while glucose addition fails to form LDs. Among these nutrients, PA addition is most effective to stimulate LD formation, and depletion of PA from the medium caused LD degradation. The neutral lipids incorporated into the LD-core are composed of triacylglycerol (TAG), steryl esters, and an unknown neutral lipid (UKL) species when the cells were loaded simultaneously with cholesterol and PA.
In order to avoid the contamination with other cellular organelles, the LD-purification method was modified. The isolated LD fraction was analysed by mass spectrometry and 100 proteins were identified. Nineteen of these appear to be directly involved in lipid metabolism or function in regulating LD morphology. Together with a previous study, a total of 13 proteins from the LD-proteome were confirmed to localize to LDs after the induction with PA.
Among the identified LD-proteins, the localization of Ldp (lipid droplet membrane protein), GPAT3 (glycerol-3-phosphate acyltransferase 3) and AGPAT3 (1-acylglycerol-3-phosphate-acyltransferase 3) were further verified by GFP-tagging at the N-termini or C-termini of the respective proteins. Fluorescence microscopy demonstrated that PA-treatment stimulated the translocation of the three proteins from the ER to LDs. In order to clarify DGAT (diacylglycerol acyltransferase) function in Dictyostelium, the localization of DGAT1, that is not present in LD-proteome, was also investigated. GFP-tagged DGAT1 localized to the ER both, in the presence and absence of PA, which is different from the previously observed localization of GFP-tagged DGAT2, which almost exclusively binds to LDs.
The investigation of the cellular neutral lipid level helps to elucidate the mechanism responsible for LD-formation in Dictyostelium cells. Ldp and two short-chain dehydrogenases, ADH (alcohol dehydrogenase) and Ali (ADH-like protein), are not involved in neutral lipid biosynthesis. GPAT, AGPAT and DGAT are three transferases responsible for the three acylation steps of de novo TAG synthesis. Knock-out (KO) of AGPAT3 and DGAT2 did not affect storage-fat formation significantly, whereas cells lacking GPAT3 or DGAT1 decreased TAG and LD accumulation dramatically. Furthermore, DGAT1 is responsible for the accumulation of the unknown lipid UKL. Overexpression of DGAT2 can rescue the reduced TAG content of the DGAT1-KO mutant, but fails to restore UKL content in these cells, indicating that of DGAT1 and DGAT2 have overlapping functions in TAG synthesis, but the role in UKL formation is unique to DGAT1.
Both GPAT3 and DGAT1 affect phagocytic activity. Mutation of GPAT3 increases it but a DGAT1-KO decreases phagocytosis. The double knockout of DGAT1 and 2 also impairs the ability to grow on a bacterial lawn, which again can be rescued by overexpression of DGAT2. These and other results are incorporated into a new model, which proposes that up-regulation of phagocytosis serves to replenish precursor molecules of membrane lipid synthesis, whereas phagocytosis is down-regulated when excess fatty acids are used for storage-fat formation.