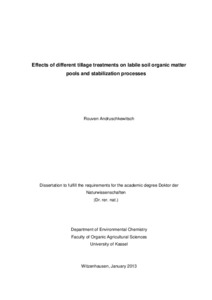 An improved understanding of soil organic carbon (Corg) dynamics in interaction with the mechanisms of soil structure formation is important in terms of sustainable agriculture and reduction of environmental costs of agricultural ecosystems. However, information on physical and chemical processes influencing formation and stabilization of water stable aggregates in association with Corg sequestration is scarce. Long term soil experiments are important in evaluating open questions about management induced effects on soil Corg dynamics in interaction with soil structure formation. The objectives of the present thesis were:

(i) to determine the long term impacts of different tillage treatments on the interaction between macro aggregation (>250 µm) and light fraction (LF) distribution and on C sequestration in plots differing in soil texture and climatic conditions.

(ii) to determine the impact of different tillage treatments on temporal changes in the size distribution of water stable aggregates and on macro aggregate turnover.

Soil samples were taken in 0-5 cm, 5-25 cm and 25-40 cm depth from up to four commercially used fields located in arable loess regions of eastern and southern Germany after 18-25 years of different tillage treatments with almost identical experimental setups per site. At each site, one large field with spatially homogenous soil properties was divided into three plots. One of the following three tillage treatments was carried in each plot: (i) Conventional tillage (CT) with annual mouldboard ploughing to 25-30 cm (ii) mulch tillage (MT) with a cultivator or disc harrow 10-15 cm deep, and (iii) no tillage (NT) with direct drilling. The crop rotation at each site consisted of sugar beet (Beta vulgaris L.) - winter wheat (Triticum aestivum L.) - winter wheat. Crop residues were left on the ﬁeld and crop management was carried out following the regional standards of agricultural practice.
To investigate the above mentioned research objectives, three experiments were conducted: Experiment (i) was performed with soils sampled from four sites in April 2010 (wheat stand). Experiment (ii) was conducted with soils sampled from three sites in April 2010, September 2011 (after harvest or sugar beet stand), November 2011 (after tillage) and April 2012 (bare soil or wheat stand). An incubation study (experiment (iii)) was performed with soil sampled from one site in April 2010.

Based on the aforementioned research objectives and experiments the main findings were:

(i) Consistent results were found between the four long term tillage fields, varying in texture and climatic conditions.
Correlation analysis of the yields of macro aggregate against the yields of free LF ( ≤1.8 g cm-3) and occluded LF, respectively, suggested that the effective litter translocation in higher soil depths and higher litter input under CT and MT compensated in the long term the higher physical impact by tillage equipment than under NT. The Corg stocks (kg Corg m−2) in 522 kg soil, based on the equivalent soil mass approach (CT: 0–40 cm, MT: 0–38 cm, NT: 0–36 cm) increased in the order CT (5.2) = NT (5.2) < MT (5.7). Significantly (p ≤ 0.05) highest Corg stocks under MT were probably a result of high crop yields in combination with reduced physical tillage impact and effective litter incorporation, resulting in a Corg sequestration rate of 31 g C-2 m-2 yr-1.

(ii) Significantly higher yields of macro aggregates (g kg-2 soil) under NT (732-777) and MT (680-726) than under CT (542-631) were generally restricted to the 0-5 cm sampling depth for all sampling dates. Temporal changes on aggregate size distribution were only small and no tillage induced net effect was detectable. Thus, we assume that the physical impact by tillage equipment was only small or the impact was compensated by a higher soil mixing and effective litter translocation into higher soil depths under CT, which probably resulted in a high re aggregation.

Overall, no net changes on macro aggregation were identified in the short term. Furthermore, no indications for an effective Corg sequestration on the long term under NT in comparison to CT were found. The interaction of soil disturbance, litter distribution and the fast re aggregation suggested that a distinct steady state per tillage treatment in terms of soil aggregation was established. However, continuous application of MT with a combination of reduced physical tillage impact and effective litter incorporation may offer some potential in improving the soil structure and may therefore prevent incorporated LF from rapid decomposition and result in a higher C sequestration on the long term.

This project is granted by the Deutsche Forschungsgemeinschaft (DFG-Research Training Group 1397 ‘‘Regulation of soil organic matter and nutrient turnover in organic agriculture’’).