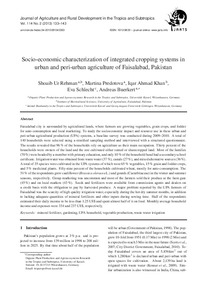 Faisalabad city is surrounded by agricultural lands, where farmers are growing vegetables, grain crops, and fodder for auto-consumption and local marketing. To study the socioeconomic impact and resource use in these urban and peri-urban agricultural production (UPA) systems, a baseline survey was conducted during 2009–2010. A total of 140 households were selected using a stratified sampling method and interviewed with a structured questionnaire. The results revealed that 96 % of the households rely on agriculture as their main occupation. Thirty percent of the households were owners of the land and the rest cultivated either rented or sharecropped land. Most of the families (70 %) were headed by a member with primary education, and only 10 % of the household head had a secondary school certificate. Irrigationwater was obtained from waste water (37 %), canals (27 %), and mixed alternative sources (36 %). A total of 35 species were cultivated in the UPA systems of which were 65% vegetables, 15% grain and fodder crops, and 5% medicinal plants. Fifty-nine percent of the households cultivated wheat, mostly for auto-consumption. The 51 % of the respondents grew cauliflower (Brassica oleracea L.) and gourds (Cucurbitaceae) in the winter and summer seasons, respectively. Group marketing was uncommon and most of the farmers sold their produce at the farm gate (45 %) and on local markets (43 %). Seeds and fertilizers were available from commission agents and dealers on a credit basis with the obligation to pay by harvested produce. A major problem reported by the UPA farmers of Faisalabad was the scarcity of high quality irrigation water, especially during the hot dry summer months, in addition to lacking adequate quantities of mineral fertilizers and other inputs during sowing time. Half of the respondents estimated their daily income to be less than 1.25 US$ and spent almost half of it on food. Monthly average household income and expenses were 334 and 237 US$, respectively.