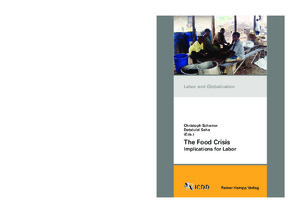 The Food Crisis: Implications for Labor

Food prices have gone up to prohibitive levels for many of the world’s poor. The vast majority of those who are hungry in the world today are working in agriculture, either as small landholders or as waged agricultural workers. The majority of the food producers have not benefited from rising prices. Apparently, the bargaining power of many producers, just as that of the end consumers, has been weakened vis-à-vis the buyers and retailers of agricultural produce. This powerlessness is also in the face of governments that fail to provide an appropriate infrastructure for smallholders and social protection. The first part of the book provides an introduction to the immediate and structural causes of the food crisis. The second part contains contributions that not only highlight the plight of rural labour but also develop tools for measuring the decent work deficit. The last part emphasizes income security as a major precondition for food security. It looks at the experiences of Brazil and India with the extension of social protection for the poor.